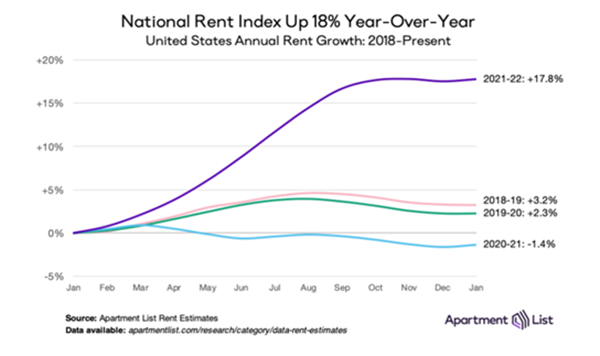 January rents inched back up into positive territory nationally overall, but many metros are still seeing declining rents, according to the Apartment List February report.

The national index was up a slight 0.2 percent over the course of January but 41 metros still saw falling rents in January. The report says even though month-over-month growth has moved back into positive territory, rent growth has still cooled substantially from last year’s peak.

However, not every city has seen a dip in rents. Many Sun Belt cities continue to show rent increases.

“Even though rent growth has been essentially flat over the past three months, it’s still pacing a bit ahead of the pre-pandemic trend. It’s likely that rent growth will pick back up in the coming months, though it’s still unclear just how much we should expect rents to rise in the year ahead,” write housing economists Chris Salviati, Igor Popov, Rob Warnock, and Lilla Szini in the Apartment List report. 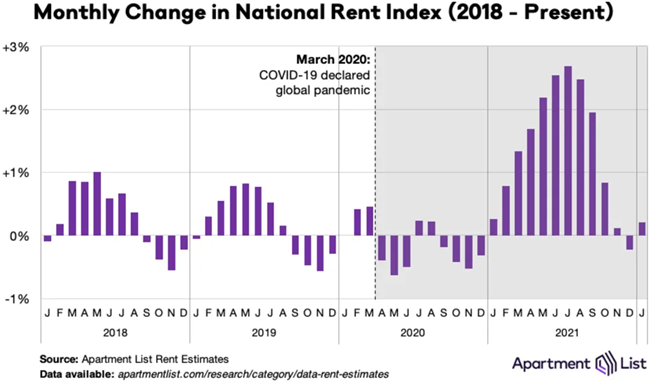 The nation’s largest city is also the place where rent prices rebounded from the pandemic and have grown the fastest over the past 12 months.

New York City narrowly edged out a number of smaller but rapidly-growing cities that absorbed significant rental demand throughout the pandemic, including Tampa, Fla., where rents grew at 31.4 percent, and Phoenix, Ariz., at 27.9 percent. 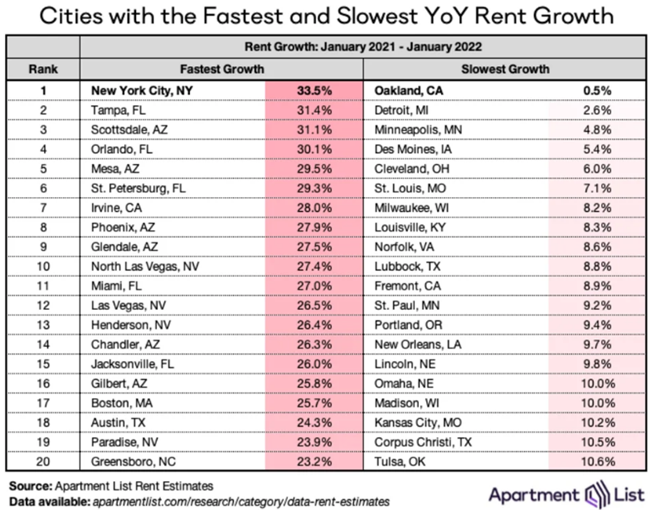 The report says the vacancy increase has been modest and gradual, but “it represents an important inflection point, signaling that tightness in the rental market is finally beginning to ease. The vacancy situation remains historically tight, but the gradual easing of recent months has likely been contributing to the slowdown in rent growth.”

January brought a return to positive rent growth, with a modest 0.2 percent increase.  “While the apartment market remains tight – the national vacancy rate sits just above 4 percent compared to 6 percent pre-pandemic – the winter season continues to bring signs that pressure is gradually beginning to ease.

“That said, at least part of the recent slowdown in rent growth is attributable to seasonality in the market, and the spring is likely to bring with it a return to faster price increases. Despite a recent cool-down, many American renters are likely to remain burdened throughout 2022 by historically high housing costs,” Apartment List says in the report.