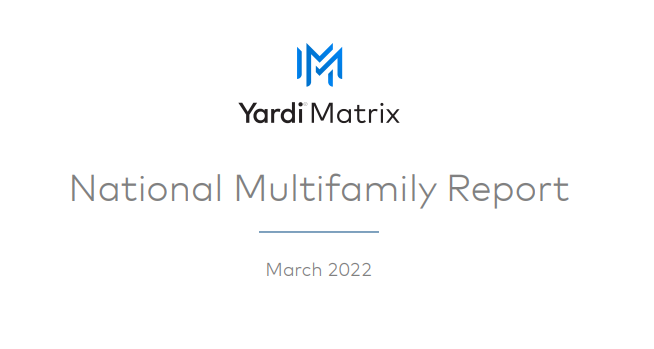 Rent growth hit a record high for the first quarter, according to Yardi Matrix, as multifamily rents surged again in March.

However, concerns about the economy going forward show the potential for headwinds to rent growth and inevitable decline in some markets.

“Demand is expected to remain healthy, but rent growth is likely to decelerate as concerns grow about the economy. Inflation is moderating slowly, and rising rents and energy prices may keep it elevated longer than expected,” the report says.

Here are highlights from the report:

“The big picture that emerges from March multifamily data is that the market remains healthy, though signs point to the inevitable deceleration in some markets. Meanwhile, economic conditions and global events contain headwinds that justify the expectations of moderation and caution,” Yardi Matrix writes in the report.

Rent Growth Continues Strong in the Southwest and Southeast

Rent growth continues to be a national phenomenon, led by the migration to the Southeast and Southwest. The top five metros—Miami, Orlando, Tampa, Las Vegas and Phoenix—all showed asking-rent increases of 23 percent or more.

“Demand for housing continues to be robust, led by young workers whose rapidly rising wages provide the wherewithal to form independent households apart from parents and roommates.

“Household growth and absorption are likely to slow to more normal levels in 2022, to about half of last year. That would presage healthy—albeit more moderate—gains in multifamily fundamentals,” the report says.