In the first week of August, 33 percent of renters missed housing payments and failed to make their full housing payments on time, according to Apartment List. It’s the highest non-payment rate since this survey began in April.

“Now that the protections and benefits provided by the CARES Act have expired, we find that renters are actively renegotiating leases with their landlords to remain in their homes,” said Chris Salviati, Housing Economist at Apartment List, about the survey.

Highlights of the survey include: 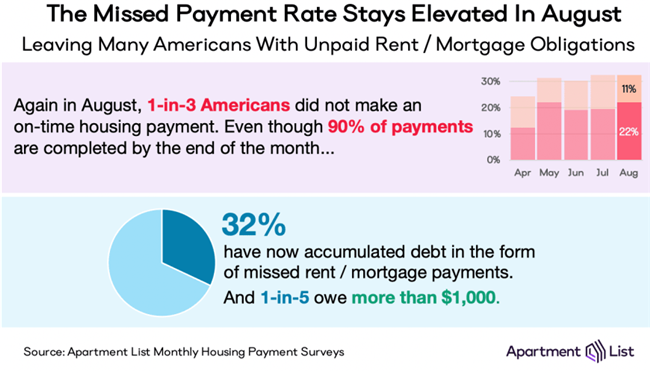 Entering August with outstanding debt from prior months

“Given that we have witnessed consistently elevated rates of non-payment for months, it is unsurprising that 32 percent of Americans entered August with outstanding housing debt from prior months. This is creating a deep sense of housing insecurity for those struggling to keep up financially,” the report says.

“Among those with unpaid housing bills, 66 percent of renters and 65 percent of homeowners are worried about facing an eviction or foreclosure within the next six months. Moreover, two-thirds of the renters in this group have not made a complete August payment. With the recent expiration of most federal eviction and foreclosure protections and a lapse in expanded unemployment benefits, this insecurity is sure to deepen over the coming weeks,” the report says.

Eviction Concerns Mount, but Many Landlords and Renters Are Reaching New Agreements

Some statewide moratoriums have already expired, with others set to expire in coming months. And the majority of federal CARES Act protections have expired.

“Against this backdrop, respondents to our survey are expressing significant concern about their short-term housing security. In August, 37 percent of renters say that they are at least somewhat concerned about facing an eviction within the next six months, while 26 percent of homeowners are concerned about foreclosure,” the report says.

“Evictions are not just a threat to renters, but potentially costly for landlords as well. Given the current circumstances, landlords have to decide whether an eviction makes sense financially, even if their tenants are behind on rent. With so many Americans out of work, a vacant unit may be difficult to fill, creating long stretches of lost revenue for the landlord. So for some, providing leniency to tenants who are in a financial bind (on the grounds that rent debt will be repaid eventually) could be mutually beneficial. With that in mind, our data show that many landlords are showing a willingness to negotiate repayment plans for their tenants who are struggling,” Apartment List says.

Among renters who entered August with missed housing payments and unpaid bills, 28 percent said that they had reached an agreement with their landlord for a payment plan or otherwise renegotiated lease terms, while an additional 21 percent are in the process of negotiating such an agreement. At least 33 percent had not inquired about negotiating with their landlord, while the remaining 18 percent inquired but were denied.

The survey says renters who are up-to-date on their payments are far less likely to seek a new arrangement. Eighty-two percent have made no such request, while only 10 percent have negotiated (or are currently negotiating) a new payment plan. 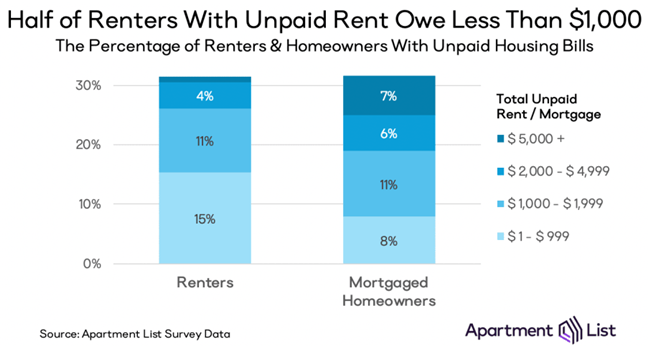 Housing security in jeopardy for many

Many of the protections and benefits put in place at the outset of the pandemic are now expiring, and the prospects for another round of stimulus remain uncertain.

“As unpaid housing debt builds, concerns around eviction and foreclosure are mounting. Although landlords and lenders are showing a willingness to negotiate, housing security is currently in jeopardy for an unprecedented number of Americans,” the report says. 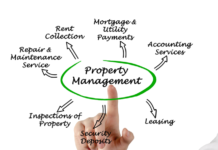 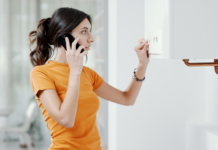