The Oregon housing affordability crisis that rose in the last decade is tied to the lack of new housing construction over the past 10 years, according to the Oregon Office of Economic Analysis report.

“While much of the attention is paid to rising housing costs, we know they are the symptom and not the cause of the disease. The chief underlying cause is the ongoing low levels of new construction this decade,” the report says.

“On a population-growth-adjusted basis, Oregon built fewer new housing units this decade than we have since at least World War II. With data going back nearly 60 years, never have we built fewer new units on a sustained basis than we did in the 2010s. 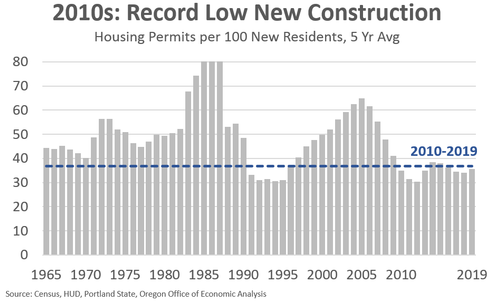 “It is both a near-term concern in that it makes it harder for our neighbors to make ends meet, and it is a long-term risk to the outlook of young, working-age households that cannot afford to move here in the first place,” the report says.

The report also pointed out that despite the housing issues, growth of income was good in the past decade. 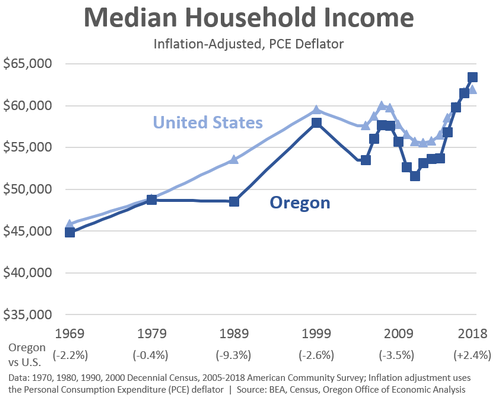 “For the first time in at least 50 years, Oregon’s median household income is higher than (the national median). And assuming another solid year of income gains in 2019, Oregon will end the decade with inflation-adjusted household incomes somewhere around 13 percent higher than they ever have been before,” the report said.

Oregon employment was uneven across the state 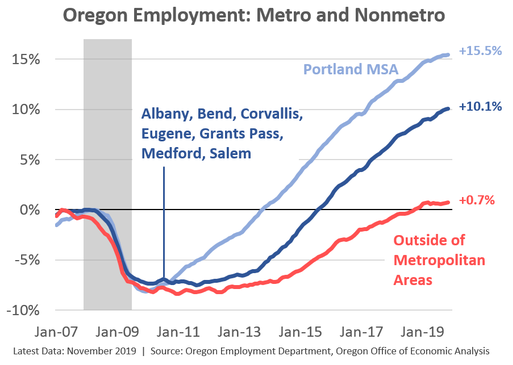 Portland’s growth has “been transformational, as it outpaced all but a few other metro areas” in terms of things like increases in educational attainment, household income gains, and growth in the number of high-wage jobs, the report says.

The urban-rural divide increased in the past decade.

“Rural Oregon overall basically spent half the decade seeing no gains, but has seen solid growth the past handful of years. That said, just nine of Oregon’s 23 rural counties have more jobs today than they did last decade. Encouragingly, rural Oregon has very few places in permanent demographic or economic decline relative to patterns seen throughout the country,” the report says.

Josh Lehner of the Oregon Office of Economic Analysis writes, “All told, the 2010s were a bad economic decade. We spent much of the past 10 years simply digging our way out of the Great Recession, which means we underperformed overall. That said, we are ending the decade in great shape and with an economy that has rarely been better. It’s a low bar to overcome, but taken as a whole, the 2020s should be better.”