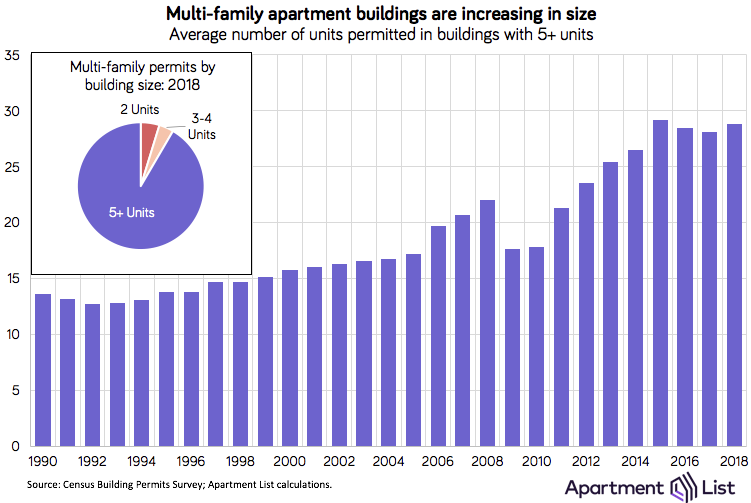 A new report shows that approved housing construction and development nationally remains 38 percent below its pre-recession peak, according to Apartment List. Stagnant single-family home construction and a select group of coastal markets are to blame. Meanwhile multifamily apartment buildings are increasing in size.

Smaller metros and booming multifamily construction, on the other hand, are picking up the slack. 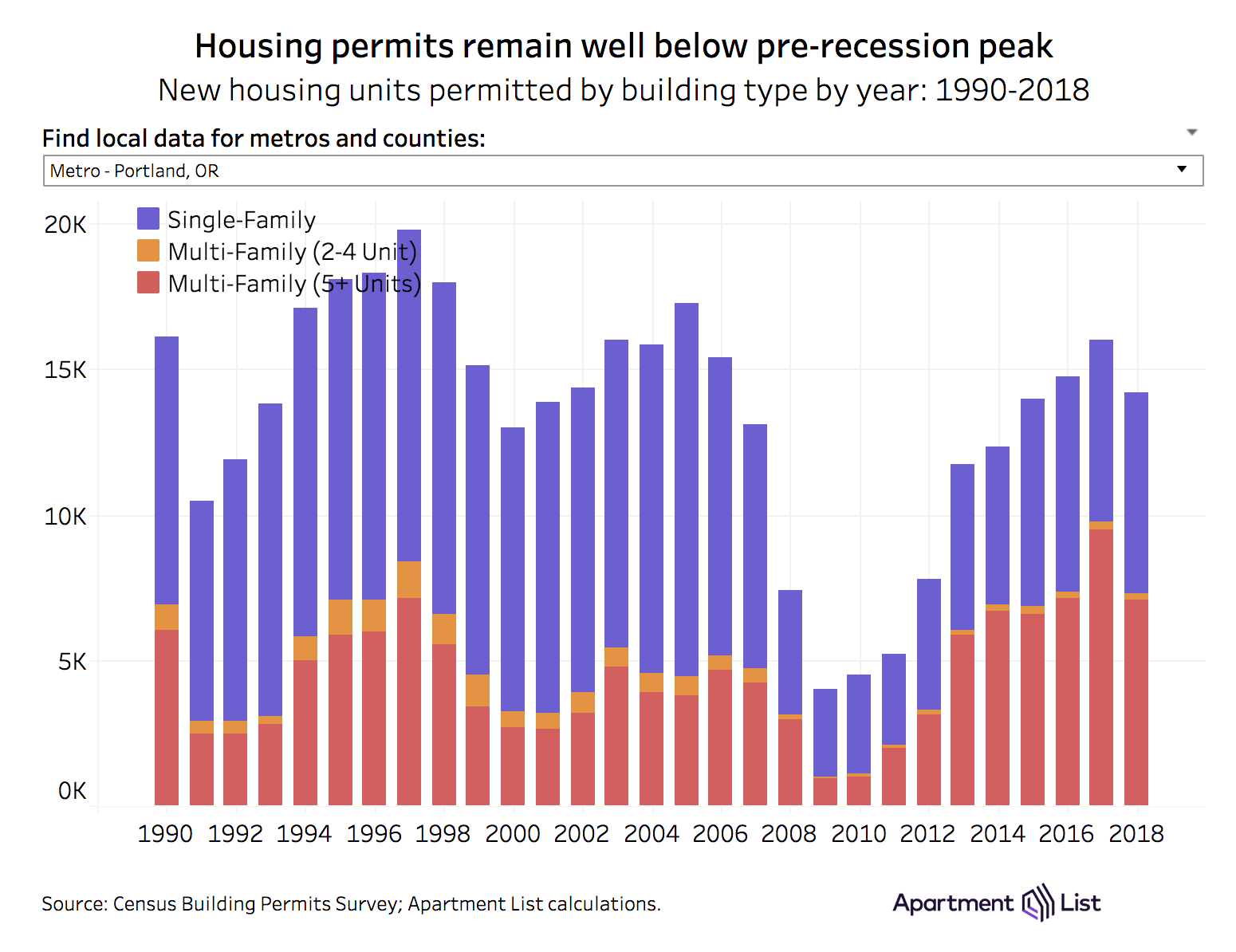 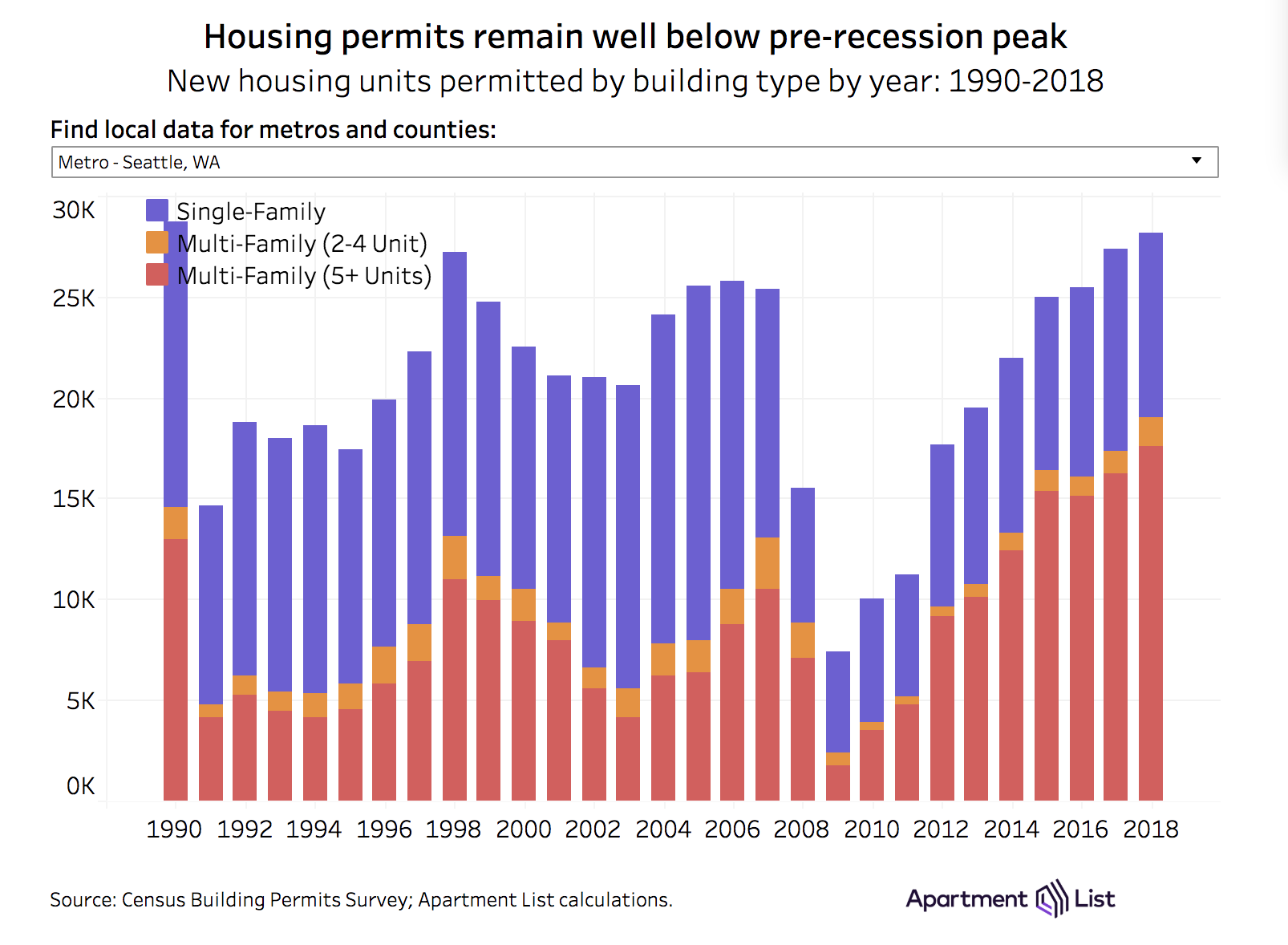 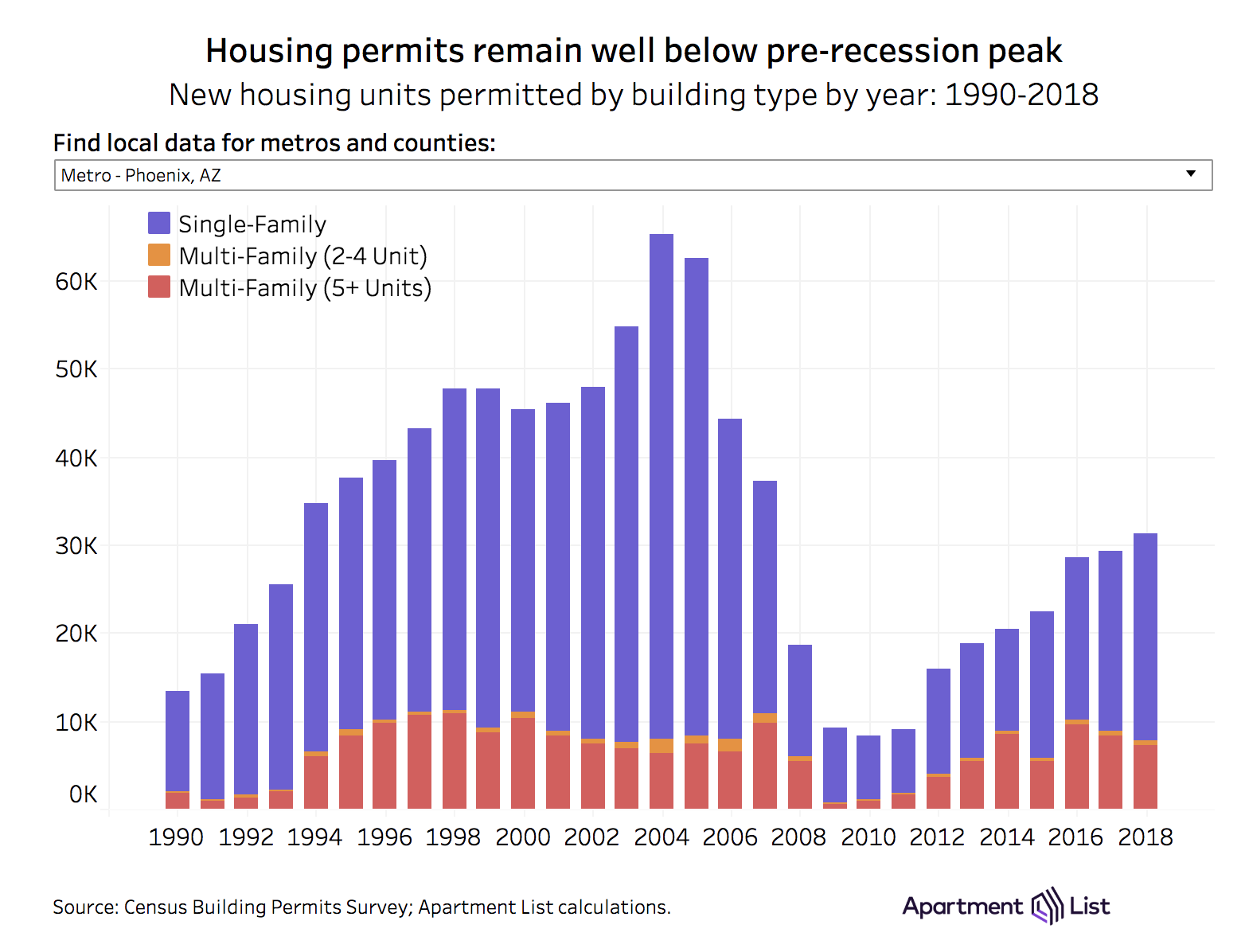 Apartment List economist Chris Salviati writes in the report that housing affordability has emerged as a key issue in national politics, as millions of American households struggle with their housing costs. That said, housing and labor markets are inherently local, and distinct trends are playing out in different regions of the county.

In many of the nation’s largest coastal metros, acute housing shortages have led to rapid increases in housing costs. However, many smaller metros are actually adding more than enough new housing to keep pace with job growth, indicating that affordability issues in these regions may be driven more by a lack of well-paid jobs than by a shortage of housing.

“In order to better understand these issues, we analyzed data from the Census and Bureau of Labor Statistics to better understand how much new housing is being built and where. We study how that new housing supply lines up with job growth for counties and metro areas across the U.S., and discuss how these findings fit within the broader conversation around housing affordability across America,” Salviati writes in the report here.

In the recovery years that followed, multi-family housing construction rebounded fairly quickly, driven by a trend toward urbanization that increased demand for housing in and around city centers. The number of multi-family units permitted surpassed its pre-recession peak in 2015 and has since maintained that pace.

Meanwhile, construction of single-family homes has recovered much more slowly — the number of single-family housing units permitted in 2018 was barely half the number permitted in 2005. Consequently, multifamily units have made up a much greater share of new housing in the post-recession period. From 1990 to 2005, multi-family units made up 23.4 percent of all residential building permits issued, while from 2006 to 2018, that share increased to 33.9 percent.

Despite the boom in apartment construction, multi-family housing has not been able to fully compensate for the lack of new single-family construction. The total number of residential housing units permitted in 2018 was roughly the same as the number permitted in 1994, when the country’s population was 20 percent less than it is today. While multi-family housing may be better suited to meet the demand for walkable, transit-oriented neighborhoods, local zoning codes severely limit the locations where multi-family housing can be built. Consequently, the slowdown in single-family construction has contributed to a tightening of starter home inventory, which may be preventing some prospective millennial homebuyers from purchasing homes.

The increase in the share of residential building permits comprised of multifamily units is a trend that holds true not just at the national level, but in each of the nation’s 25 largest metro areas.

While the multifamily category made up a greater share of new housing in all of the 25 largest metros, the size of the increase varies dramatically. The biggest jumps in the multifamily share have occurred in the nation’s densest metros, places that had already been building a significant amount of multifamily. The New York City metro experienced the biggest jump. In the pre-recession years from 1990 to 2005, multi-family comprised 44.8 percent of all building permits issued in the New York City metro — then the second-highest share among the 25 largest metros. In the mostly post-recession years from 2006 to 2018, that share spiked to 76.3.

“We see similarly large increases in other dense coastal metros, with Boston, San Francisco, Philadelphia, and San Diego rounding out the top five list for metros with the largest increases in the multifamily permit share. Notably, Philadelphia is the only metro among those five that has built enough new housing over the past decade to keep pace with job growth, according to our jobs-per-permit metric, and as a result has seen relative stability in their housing market,” Salviati writes in the report.

There is a subset of metro areas that are thriving economically and building sufficient new housing to keep pace with job growth.

This group is primarily comprised of Sun Belt metros such as Phoenix, Dallas, Atlanta, and Charlotte. Notably, single-family is still the dominant type of new housing being built in these metros, and while the multifamily share is on the rise in these regions, the increases are much more muted than those observed in the dense coastal metros discussed above.

In Phoenix, for example, single-family accounted for nearly three-in-four new housing units permitted from 2006 to 2018. It seems that the metros most effectively meeting the demand for new housing are still primarily doing so by continuing to sprawl, despite an increasing demand for dense, walkable neighborhoods that prioritize sustainability.

In new multifamily construction, the ‘missing middle’ is still missing

These disparate patterns of residential development are playing out at a time when single-family housing has begun to face unprecedented criticism from both housing experts and policy makers. For the latter half of the 20th century, suburban single-family homes were synonymous with the popular understanding of the “American Dream.”

In recent years, however, a more nuanced view has emerged, which acknowledges that single-family zoning policies were often inextricably linked to redlining practices that served to explicitly enforce patterns of residential racial segregation. Single-family zoning also impedes the development of dense multifamily housing units, which can be an important source of market-rate affordable housing. Furthermore, denser cities are significantly more sustainable, and growing our cities with more dense development can play an important role in combating climate change.

Consequently, policy makers across the country are making efforts to enable multifamily development in areas that were previously reserved for single-family homes.

In 2018, an ambitious set of zoning reforms known as Minneapolis 2040 upzoned half of that city’s land in a way that aims to explicitly address patterns of racial and economic inequality. The city of Seattle also recently eliminated single-family zoning in a subset of its neighborhoods, and a statewide upzoning bill in Oregon has passed. In California, where the housing shortage is most acute, the upzoning bill SB 50 is currently stalled in the state senate, awaiting a vote next year.

Many of the zoning reforms described above strive to remove barriers to building a type of housing that has been referred to as the “missing middle.”

This type of housing — two- to four-unit buildings, accessory dwelling units, townhouses, and low-rise apartment buildings — can play an important role in increasing density and creating walkable neighborhoods, without affecting neighborhood character is the same way as mid- and high-rise apartment buildings. Despite the benefits of this type of housing, the multifamily housing that has been built in recent years increasingly takes the form of large apartment complexes.

We find that two- to four-unit properties made up just 3.0 percent of all housing units permitted in 2018. That share has been on a downward trajectory since 1990, when duplexes, triplexes, and fourplexes comprised 4.9 percent of residential permits. Two- to four-unit properties account for 8.0 percent of the nation’s total housing stock, indicating that this type of construction was far more prevalent in the past. Meanwhile, buildings with five or more units accounted for 91.6 percent of multifamily units permitted in 2018, and the average size of these properties has been steadily increasing. In 1990, the average number of units in buildings with five or more units was 13.6, but by 2018 that average building size more than doubled to 28.7, the report says.

While these large multifamily developments are an important form of new housing supply, they are usually confined to locations in and around the downtown areas of major cities.

Due to high construction costs — for land, labor, materials, and regulatory costs — developers build larger properties at luxury price points in order to achieve economies of scale and ensure that projects prove profitable. Zoning reform can remove bureaucratic hurdles to allow denser development in varying forms throughout a metro area.

“As millions of Americans struggle with housing costs, the issue has come to take center stage in both national and local politics. A number of 2020 Democratic frontrunners have issued policy platforms that address housing affordability, while cities and states across the country have begun to debate and enact fundamental reforms to their zoning codes,” Salviati writes.

“Much of this debate has centered on the need for dense, transit-oriented development in our nation’s cities. Dense housing plays an important role in maintaining inclusive housing affordability and cities developed in this manner are also significantly more environmentally sustainable.

“While we find that proportionally more multifamily housing has been built in recent years, the metros where it is most prevalent tend to be the coastal superstar cities that have struggled to build enough new housing overall.

“Meanwhile, fast-growing Sun Belt metros have continued to rely on single-family homes to maintain sufficient housing supply. These contrasting trends emphasize that decisions around what type of housing gets built and where are crucial to determining the future of America’s cities,” Salviati says in the report.

Chris Salviati is a housing economist at Apartment List, where he conducts research on economic trends in the housing market. Chris previously worked as a research assistant at the Federal Reserve and an economic consultant, and he has BA and MA degrees in economics from Boston University.