Further growth in demand for apartments in 2019 is expected, especially in Class B multifamily, following a good year in 2018 that pushed up average monthly rents across the U.S., according to a new report from RentCafe.

“Healthy job creation, a robust economy, and positive demographic trends are promoting the formation of new households and stimulating demand for rentals,” Doug Ressler, Director of Business Intelligence at Yardi Matrix, said in a release.

“Vacancies are likely to remain low and declining in most markets, particularly among Class B and C multifamily buildings,” Ressler said as the growth in demand for apartments continues.

What happened to rents in 2018

The cost of renting an apartment started seeing annual increases above 2.5% in February, reached the highest month-over-month growth rate in May (0.8%) and peaked in September at $1,422 according to the latest data provided by Yardi Matrix.

“Aggressive increases in the price of Las Vegas apartments throughout the year have kept Sin City on the podium in terms of rent growth for most of the year, and by year-end, it has outpaced the largest renter hubs with rents almost 8% higher than last year,” the report says.

“Phoenix apartments have also seen some of the fastest rent growths during 2018, and much like Las Vegas, the average rent in Phoenix passed the $1,000 mark by year-end thanks to a 7.7% Y-o-Y increase. Apartments for rent in Los Angeles now cost 6.6% more compared to the end of last year, earning it third place among the 20 largest renter hubs in the U.S. This translates into a $153 growth over 12 months, which is second only to Manhattan, where rents have increased by $157 (albeit that accounts for a more modest proportional change of 3.9% due to the $4,200 monthly average).” 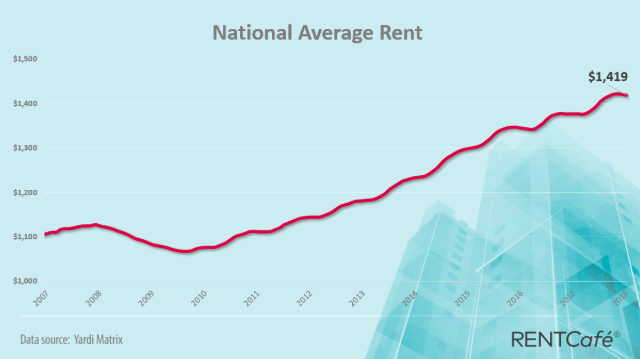 Summary of key takeaways from the report