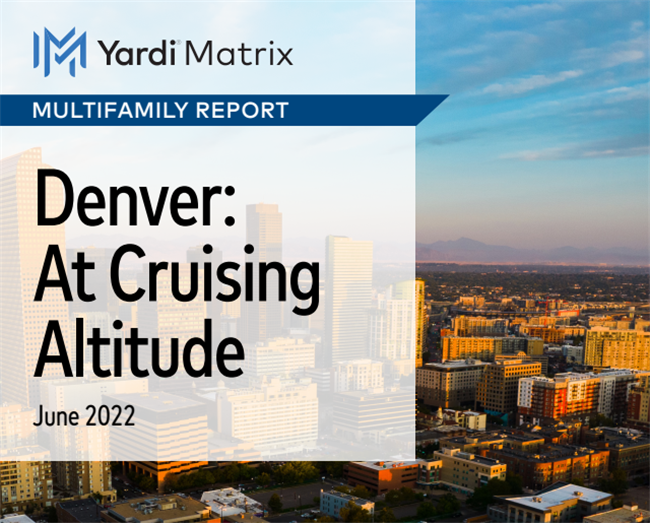 The Denver multifamily rental market shows rent growth picking up again, a job market that leads the nation and transaction activity that remains hot, according to the June Denver Yardi Matrix multifamily report.

“One of the strongest metros for tech development over the past decade, Denver has benefited from a strong multifamily market that improved in leaps and bounds, even weathering the pandemic better than larger markets,” Yardi Matrix says in the June Denver Multifamily Report.

“Coming on the heels of 2021—when average asking rates increased by 1.2 percent on a monthly basis—rent expansion softened in the winter. However, through spring, rates rose again to 0.7 percent on a trailing three-month basis as of April, to an overall average of $1,847. Occupancy rose 50 basis points in the 12 months ending in March, to 95.4 percent.”

“Since January, the unemployment rate in Denver has improved by 40 basis points, to 3.6 percent as of March, on par with the national rate and leading the state by 10 basis points. The job market expanded 5.1 percent in the 12 months ending in February, topping the 4.7 percent U.S. rate,” the report says.

The report says Denver is getting a boost from some company expansions.  Amazon, which recently announced plans to hire another 2,700 employees for its delivery and processing stations in Denver, and United Airlines, which plans to add 3,000 jobs by 2026.

However Yardi Matrix cautions in the report that Denver multifamily rent growth  “faces many of the same headwinds” impacting other markets such as supply chain issues, rising inflation, workforce shortages, insufficient affordable housing and the virus.

“These challenges maintain a high level of uncertainty that is dragging the recovery,” the report says.

Get the full report at Yardimatrix.com.