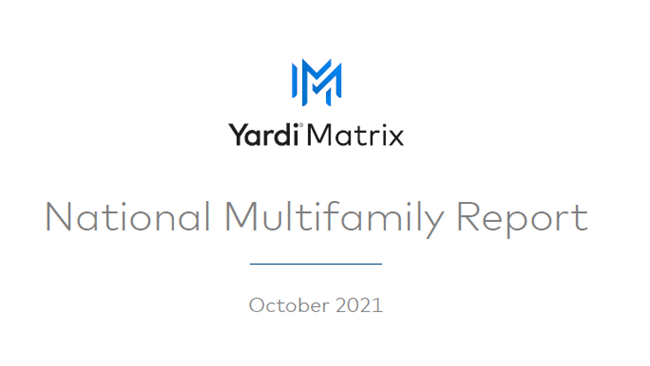 With no sign of slowing, multifamily rents continued upward in October, reaching new highs as the surge in demand continues to push up rental rates, according to the Yardi Matrix Multifamily Report.

Since March, the average U.S. asking rent has increased by $179, or roughly the amount of increase over the previous five years combined for rental rates, Yardi Matrix reports, driven by demand.

Highlights from the report

Seasonal rental rates tend to flatten in a normal year between September and March, but this has not been a normal year. How long before things slow down to what would be normal in a rental year is an unknown at this point.

The build-to-rent community continues to grow as asking rents in the single-family market are up 14.7 percent year-over-year.

“One difference is that there is a larger divergence in growth in the single-family market. Growth on the metro level is led by Miami (41.9 percent), Tampa (41.0 percent), and Phoenix (24.8 percent), with a large gap between those metros and those at the bottom of the rankings, San Antonio (6.9 percent), Kansas City (6.4 percent), and Pittsburgh (6.2 percent).

“If there is a surprise with the 2021 demand numbers, it comes from the turnaround of the gateway markets. Gateway markets—which we define as New York, Boston, Washington, D.C., Miami, Chicago, San Francisco and Los Angeles—saw negative absorption in 2020. With offices and recreation venues closed, some renters left for the suburbs and less expensive markets.

“It’s not a given that gateways can maintain this year’s success. All of them have challenges that include expensive rents, high taxes, concerns about crime and schools, and movement of corporate headquarters to tech hubs in the South and Southwest. Plus, growth in work-from-home policies means fewer knowledge workers will be compelled to live near urban office towers. That said, multifamily performance in 2021 demonstrates that gateway markets continue to have an allure for many, including young workers looking for life experience and retirees seeking amenities, which should provide a consistent base of demand,” Yardi Matrix said in the report.

Rents Surge Again in September, but Less Than Previous Months