Apartment water conservation – which provides a quick return on investment for apartment owners and property managers – is the passion of two brothers who have become the toilet “property brothers” of the multifamily industry.

The story of two brothers’ latest project, at the Silverbrook Apartments in Grand Prairie, Texas, is a winner.

It will save the property 36 million gallons of water and more than $365,000 annually, representing a 65% savings in water usage and cost, and an eight-month return on their investment.

Above, Lawrence Lamondin, left in blue shirt, and brother Richard.

And It will save the tenants money on their bills, too.

EcoSystems, owned by brothers Lawrence and Richard Lamondin – who are becoming the toilet “property brothers” of the multifamily industry – designs and implements water conservation programs for apartment complexes. They partner with BH Management Services LLC, a division of BH Companies that acquires, improves and manages apartment communities.

The conservation efforts at the apartment complex included 936 bathroom upgrades, ridding Silverbrook of old and wasteful toilets, showerheads and aerators. The installation was done over 22 days, about a month’s worth of work.

The efficient solution turns a quick return on investment (ROI) for property owners, typically saving 30 to 50 percent on water and sewer bills, and seeing returns in less than 18 months. In this case, the savings achieved the largest ROI to date.

In an interview, Lawrence Lamondin talked about both the impact these projects have on the environment in terms of water savings and the savings to tenants and property managers.

Property managers can provide feedback to owners on water-saving needs

“Any good owner is going to listen to what the troops they put in place, such as their property managers, tell them,” Lamondin said. In fact, the Silverbrook project came from the property-manager level, he said.

“The first time I walked into that office, the manager – and even in her initial email to me when she first got the bills – really didn’t quite grasp how much money and how much water a program like this could save. 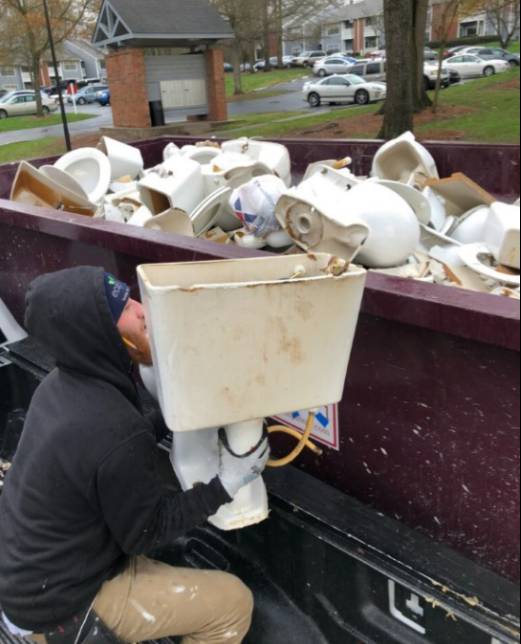 “Basically, what the manager had told me is that these residents were paying somewhere around $70 dollars per month for water and it was causing turnover at their property. With water rates rising 7 percent a year nationally on average, this is something that is only going to become more prominent in the future.

Leaking toilets can be a hidden apartment water conservation issue

“With that said, the flappers start leaking after just a few years. So we see properties that had replaced their toilets just a few years ago with problems. You walk those properties, do the tests, and you find that toilets are still leaking.

“Sometimes you have to either test them with blue dye or you find out as you go and find a handle that might get stuck and it stays up. Really, after a couple of years of that you could start seeing faulty product in your toilet,” Lamondin said.

“In my experience, the maintenance personnel are generalists. They are good at everything but a master at not really anything, for the most part,” he said.

“Maintenance in general in this industry has a lot of turnover. Most of our clients realize that even though they have these techs on site and they are up keeping the property, their focus is not water conservation.”

“I think what could be done is training of both existing and new maintenance staff as they are onboarded. They need to be trained in what to look for and what could be done. They don’t realize that a running flapper in Atlanta could cost you $200 dollars a month. That goes for a lot of Texas cities as well. I think it’s really a matter of education and training on the maintenance standpoint.”

When tenants pay vs. when management pays

Lamondin said motivation for change is sometimes higher when tenants are billed individually for water instead of management using a system of paying the bills for everyone based on a utility billing ratio.

“We find that when you’re billing residents on a ratio, they still kind of have that communal effect. They don’t really take it as if they are paying for the water.”

“On that same token, there’s only so much that you can do with old products, and really where the savings come into play is when you start retrofitting,” he said. 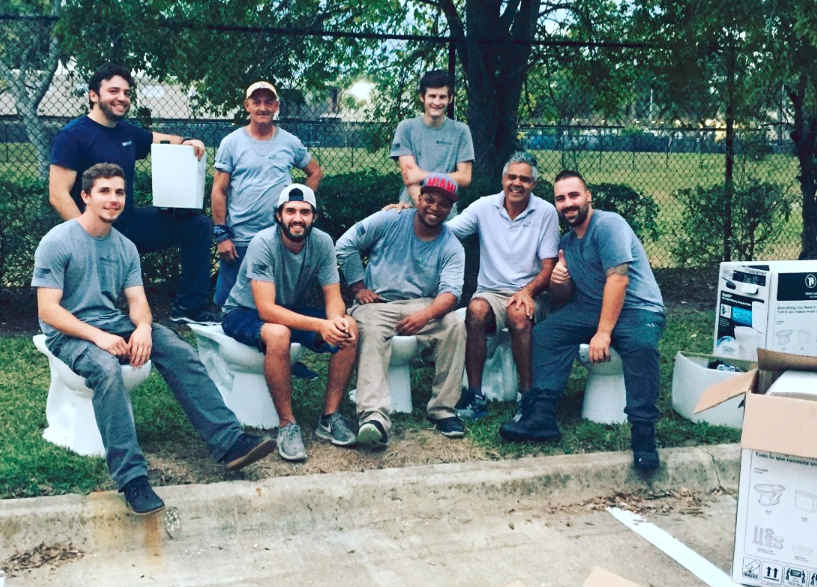 The Ecosystems crew outside a job site in Texas.

“When we started this company in 2012, it was a big educational push for us. A lot of water was about 50 percent less expensive then than it is now.”

“We spend a lot of time educating our clients,” he said. There are an increasing number of apartment owners and property managers who now recognize the need. And, that need and recognition is mostly “driven by increasing water bills and a push by their residents,” he said.

“Going green is no longer a buzzword. It’s not something that should be optional in a business plan. It’s something that is absolutely necessary if they want to stay competitive. It not only helps them from their budgeting standpoint but it helps the residents. It also ultimately, and most importantly, helps the environment.”

“That’s generally our message as a company that we push to clients. I think it’s important that people really start paying attention to what effects water conservation can have now and in the future – and it’s not that far in the future.”

Four ways Miami startups are trying to save the planet