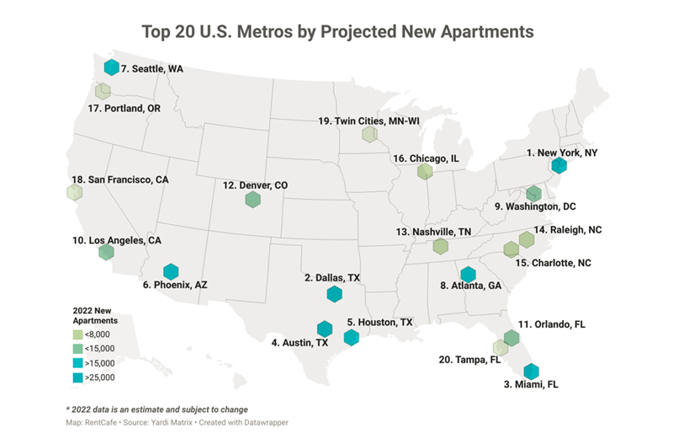 An estimated 420,000 new apartment rental units are projected to be completed this year, pushing apartment construction to an historic 50-year peak, according to a report from RentCafé.

This construction boom is driven by pent-up demand for apartments nationwide.

“By and large, apartment developers have picked up the pace in both 2021 and 2022, almost unexpectedly exceeding even the most optimistic projections for the post-pandemic multifamily landscape,” the report says.

“The construction industry is finally returning to pre-pandemic levels of activity but is still being hampered by three familiar challenges: labor shortages; material costs and availability; and supply-chain issues,” said Doug Ressler, manager of business intelligence at Yardi Matrix.

One big reason why so many metros are set to break their records from the last five years: As Ressler explained, “People who lived with family or friends during the pandemic have formed independent households as employment and savings surged.”

Seattle Ranks No. 3 In Apartment Construction

While New York and Miami top the list of new apartment units under construction, the number of Seattle apartments increased by 3,232 between January and June this year to reach the third spot on the list. Portland also ranks high and comes in at No. 17 with Phoenix at No. 6.

However, supply is struggling to keep up with demand — Seattle, like other major coastal cities, has been facing an extreme lack of housing for several years now. And, this pace of construction isn’t likely to slow down anytime soon: Seattle’s population is projected to hit 1 million by 2044 and city officials are already working on updating the One Seattle Plan that also tackles new strategies to add more housing.

The rest of the top 20 cities with most new apartments completed in the first half of the year were: Washington, DC; Phoenix; Los Angeles; Queens, NY; Charlotte, NC; Chicago; Manhattan, NY; Alexandria, VA; Portland, OR; Nashville, TN; San Diego, CA; and Atlanta.

RentCafe.com is a nationwide apartment search website that enables renters to easily find apartments and houses for rent throughout the U.S.

To compile this report, RentCafe’s research team analyzed new apartment construction data across 125 U.S. metropolitan statistical areas. The study is exclusively based on apartment data related to buildings containing 50 or more units. Metros with less than 300 units or less than two properties/buildings were not included.