Jobs in locations with strong economies are the main reason renters move, according to a survey of more than 10,000 renters from across the country.

Sydney Bennett, Senior Research Associate at Apartment List, said in an interview the company decided to do the research because, “We’re a rental platform. We’re kind of helping people move all the time, and we got curious. We wanted to talk to our renters and better understand when they’re making these moves.

“Moving to a new state, or even a new city across the state can be a big life change, and we wanted to know if they’re moving because they had a job offer there that kind of retracted them away from their current city? Or, if it was because they’re ready for a change, and they just kicked up and decided on a new city and started looking for jobs there,” Bennett said.

“Jobs are kind of the main driver of the places people want to move. Regardless if they picked it based on the location, or they got drawn by a specific job, is is places with strong economies that are where people are moving.

“I think one interesting finding is that a lot of these cities with fast-growing economies- but not what you think of as traditionally the strongest job markets – are where people are picking up and moving to. Maybe without a job already lined up. So, places like Phoenix, and San Antonio, and Las Vegas that have good job markets, but they also are cheaper than New York, San Francisco, and Los Angeles that may have jobs. But, but maybe not jobs that pay enough to afford the rent in those cities,” she said.

Renters move to stretch their money

So places like Phoenix and Las Vegas “we see renters moving because a lot of times people, especially people that might be in more low-wage or mid-wage jobs, decide to pick up and move to those places, even if they have a job where they live, because they can stretch their money further.

“We’ve done some other research around commutes as well,” Bennett said.

“I definitely think there’s a trade-off there” when people move to a new city.

“If they live in Phoenix, they can live 30 minutes from work. If they’re going to stay in LA, they’re going to commute an hour and a half, and maybe even still pay more. “And, so, I think there are definitely people where that commute affordability balance weighs in. People moving for jobs to the most expensive cities may have been recruited by companies there, she said.

“So they had a company recruit them. Or they found a job that happened to pay enough to make the move worth it. Maybe the company paid for their relocation. And so, those are the types of people who are willing to relocate to New York or San Francisco or Boston. 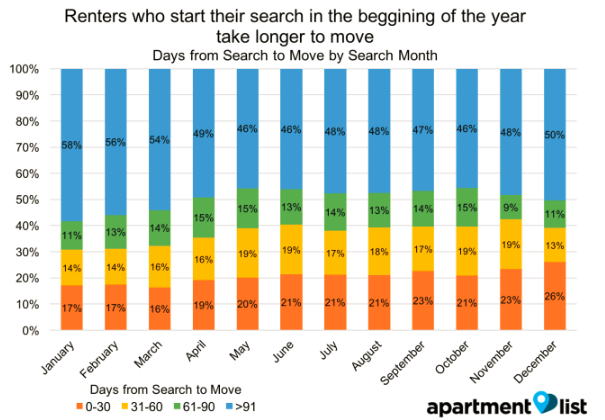 “We can use our data to see when people start searching versus when people actually end up moving. What we do see is that, overall, people who start looking earlier in the year tend to take longer.

So, renters searching in January are more likely to spend a few months looking than someone who starts looking in June, and is trying to move right in that summer season.

So, there’s kind of a ramp-up to summer.

The survey holds some good news for landlords and property managers.

“I think if you’re a property manager in one of these fast-growing places, it’s a good sign for you,” Bennett said.

“Most people moving to a new place end up renting, at least for a while, during that transition period. So, I think it’s a good sign if you have a healthy growing economy that people want to move to – not just because they have a job that drives them there.

“And, we also see that, in these places that have a lot of these location movers, they’re more likely to want to stay, which can also be a good thing if you’re a property manager. If you have less tenant turnover, people will maybe want to stick around for a couple years instead of moving every year.

“And so, you’re better able to pick an apartment in your budget if you know where you’ll be working, and in your right location.

“I think, if you were moving without a job, you might try and find somewhere to stay for a few weeks while you search, because if you get a job across town, you might want to live somewhere completely different. It’s hard to pick an apartment without knowing what your salary will be, and without knowing where you’ll live,” she said.

How did the renters move survey work?

“We surveyed renters, and then we whittled the pool down,” she said. “So, we looked at renters who are new to where they’re living.

“So, for example, if you grew up in Houston and you still live in Houston, we excluded that from our population. And then, we also removed any students, because looking at colleges is a very different process than jobs. You may go to a college somewhere you don’t want to live because of the school, or vice-versa,” she said.

Making Moves: Why Some Renters Chase Jobs & Others Chase Locations

The online survey was conducted from last August through April of 2018 with responses from 10,000 renters. Homeowners or people living with their parents were excluded, along with college students.

Sydney is a Senior Research Associate at Apartment List, where she conducts research on economic trends in the housing market. Sydney previously worked on a U.S. Senate race in Nevada, and has a BA in Economics and Political Science from UC Santa Barbara.

Apartment List is a fast-growing online apartment rental marketplace on a mission to make finding a home an easy and delightful process. The company currently has over four million units on the platform and has reached more than 66 million users in over 40 cities since launch.  Apartment List uses a business model that only charges properties for listings that have been rented.