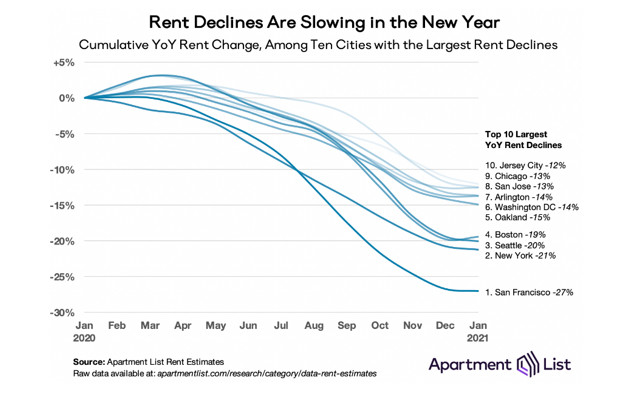 The impact of COVID-19 on the market is continuing to stabilize and “our national index ticked up by 0.1 percent from December to January, the first monthly increase that we’ve seen since last August,” according to the latest report from Apartment List.

“Although the data continue to show significant regional variation, the markets that have been most heavily impacted by the pandemic are beginning to enter calmer waters,” the report says.

Rents may have reached the bottom 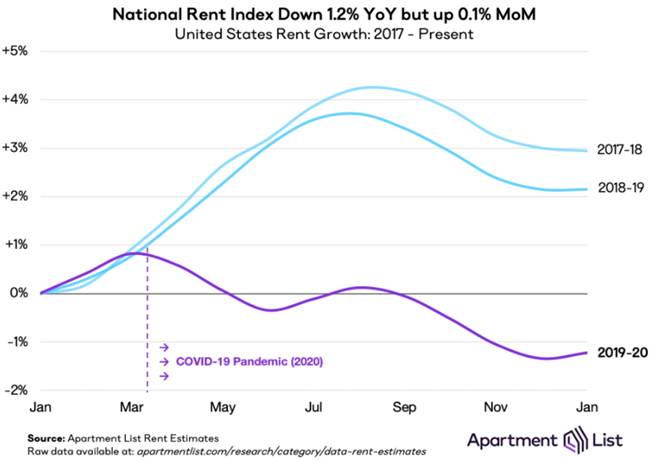 In the pricey coastal metros where rents have been plummeting, this month’s data implies that “we may have reached the bottom.” At the other end of the spectrum, many of the mid-sized markets that have seen rents grow rapidly through the pandemic have seen just modest increases this month.

The national index has been masking significant regional variation below the surface, as some markets had been continuing to watch rents plummet, while others experienced a pandemic-related boost to demand.

This month, however, these local fluctuations also appear to be flattening out, Apartment List says in the report.

San Francisco has consistently made headlines throughout the pandemic for the staggering rent declines that have led the nation. Rents in San Francisco are down by 27 percent year-over-year, and while there are no signs of prices returning to pre-pandemic levels, it appears that the bottom of the city’s price correction may be at hand.

In January, rents in San Francisco fell by just 0.4 percent month-over-month, compared to an average monthly decline of 3.4 percent from April through December 2020. Although San Francisco rents have yet to increase since the start of the pandemic, the leveling off in this month’s data indicates that the city’s rental market may be on the cusp of turning that corner.

“Seattle is very much in the same conversation as San Francisco and New York,” said Rob Warnock, Research Associate at Apartment List.

“In fact, Seattle has jostled back-and-forth with NYC for the No. 2 spot in the list of steepest annual rent drops. In Portland, the price reduction has been less dramatic (-7 percent year-over year), but I would still group it in the same broad category of expensive coastal cities with a high concentration of expensive apartments and remote work opportunities, i.e. the cities that have experienced an outsize share of pandemic-driven rent declines,” Warnock said.

He added that Seattle and Portland are also great examples of the “principal city versus secondary city” divide that “we explored recently. In short, core cities are experiencing big rent reductions while the markets in nearby, more-suburban areas are staying relatively strong.

“In Greater Seattle, rent drops are concentrated in Seattle and nearby Bellevue, Redmond, Kirkland. But as you move outward, rents in the Everett, Tacoma, Olympia areas are all getting more expensive.

“Similar things (are) happening in Greater Portland: Portland itself has gotten cheaper while YoY rents are up in Vancouver, Hillsboro, Gresham, Happy Valley, and even more so as you move further out into Salem and Bend,” Warnock said.