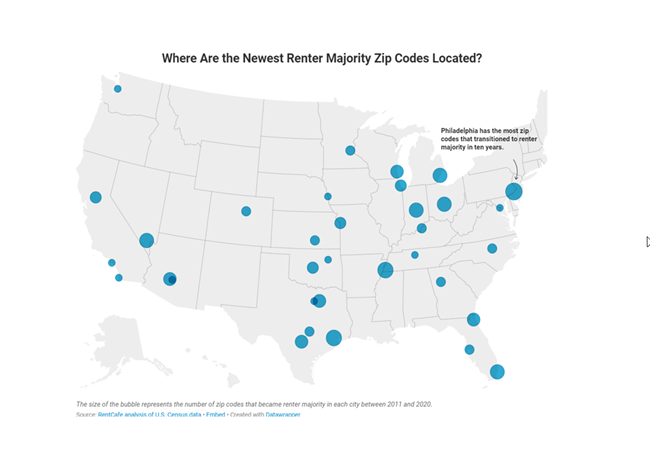 Renters now surpass homeowners in 41 percent of the zip codes in the 50 largest cities in the U.S., according to a new RentCafé report and more households are renting than at any point in the last 55 years.

“Although renting was previously considered an alternative brought on solely by circumstances, one-third of this decade’s renters now say that it’s a matter of choice.”

What Zip Codes Do Renters Prefer?

The number of renters in the U.S. rose by 12 percent between 2011 and 2020 — three times faster than the 4 percent increase in homeowners, according to the most recent U.S. Census estimates

“We found that 101 zip codes switched to renter-majority in the last 10 years. With the addition of these communities, renters represent the majority population in 41 percent or 632 of the 1,553 zip codes analyzed in the 50 largest U.S. cities.”

Downtowns are trendy for renters.

Many of the zip codes with the fastest-growing renter populations are located in city cores.

Specifically, eight of the 20 neighborhoods that grew their renter populations by more than 80 percent in the past decade are in or near downtowns.

“Similarly, our latest report on the top neighborhoods for apartment construction showed a historic boom in centrally located areas in the last five years — a timely response to the increased demand for rentals in these locations,” the report says.

“In this respect, San Antonio, TX is home to the top-trending neighborhood for renters nationwide: zip code 78215 in downtown San Antonio boasting an incredible growth rate of 238% in renter population. Here, the proportion of renters more than tripled, going from a mere 735 in 2011 to 2,482 in 2020.”

RentCafé is a nationwide apartment search website that enables renters to easily find apartments and houses for rent throughout the United States. For this study, RentCafé  looked at the number of renters and owners in 1,553 zip codes with a minimum population of 1,000 in 2011 and 2020 across the 50 largest U.S cities. To identify the zip codes that switched to renter-majority, they took into consideration those zip codes where the renter share surpassed 50 percent in 2020, compared to 10 years prior and then ranked them based on the increase in renter population in 2020 compared to 2011.