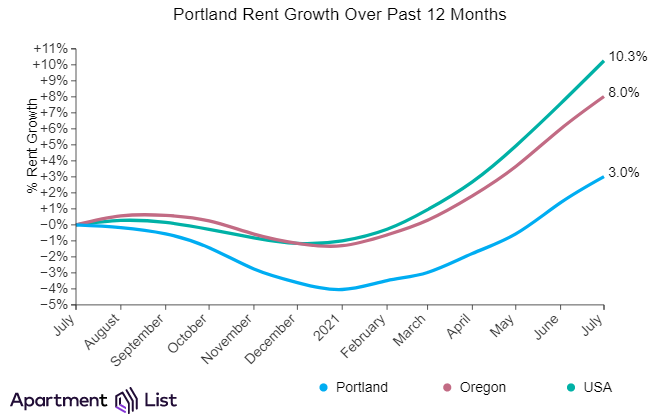 Rents continue to increase in Portland and were up by 1.6 percent in July, the sixth straight month that the city has seen rent increases, according to the latest report from Apartment List.

The Portland rents rise shows rents are up 3 percent year-over-year. Median rents in Portland are $1,199 for a one-bedroom apartment and $1,398 for a two-bedroom.

Across the Portland metro, of the largest 10 cities that Apartment List has data for, all have seen prices rise. Oregon as a whole logged rent growth of 8.0 percent over the past year.

As Portland rents rise, here’s a look at how rents compare across some of the largest cities in the metro: 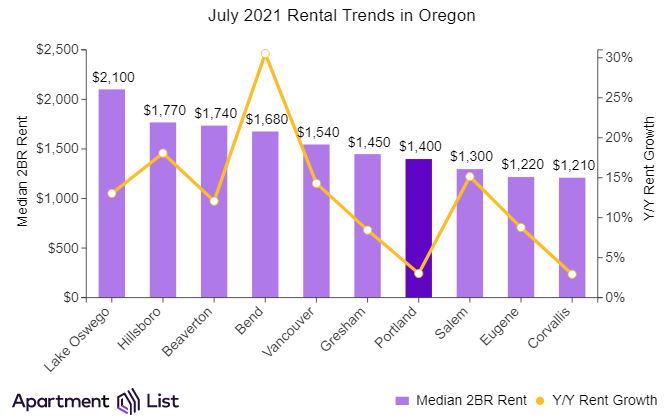 The national rent index increased by 2.5 percent from June to July, continuing a months-long trend of rapidly accelerating rent growth, according to the  August Apartment List National Rent Report.

So far in 2021, the national median rent has increased by a staggering 11.4 percent.

“To put that in context, in the pre-pandemic years from 2017-2019, rent growth from January to July averaged just 3.3 percent. This month’s spike continues to push rents well above where they would be if growth had remained on its pre-pandemic trend,” the report says.

While rent growth continues to see some regional variations, “overall rent growth in 2021 so far is outpacing pre-pandemic averages in 98 of the nation’s 100 largest cities.”

The Apartment List report says the rent spikes have now put actual rents well ahead of the trend they were on prior to the pandemic.

“The national median rent currently stands at $1,244, which is $44 greater than where we project it would be if rent growth over the past year and a half had been in line with the growth rates we saw in 2018 and 2019,” the report says. 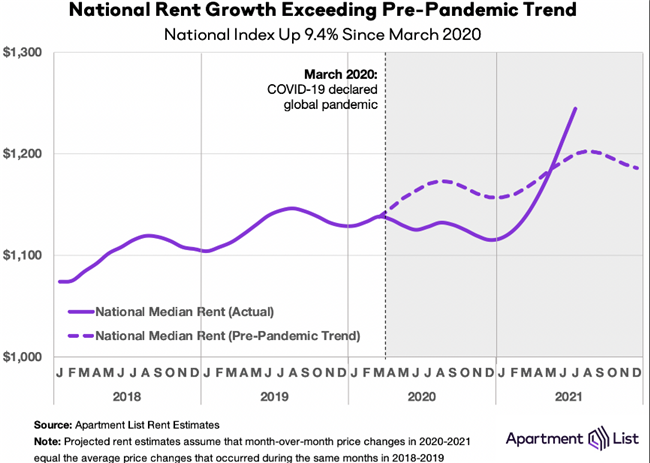 San Francisco consistently made headlines throughout the pandemic for the 26.6 percent drop in rents from March 2020 through January 2021, but since January, San Francisco rents have increased by over 17 percent.

Even sharper rebounds have been observed in Boston (+23 percent since January), Seattle (+22 percent), and New York (+21 percent).

The report said while the pandemic created some softness in the rental market last year, 2021 “has brought the fastest rent growth we have on record in our data.

“Nationally, and in nearly all individual cities across the country, rent growth in 2021 has exceeded average growth rates from pre-pandemic years. Rents remain below pre-pandemic levels in just a handful of cities. And even in markets like San Francisco and New York where ‘pandemic pricing’ is still in effect, prices are quickly rebounding.

“At the same time, booming markets like Boise continue to see prices climb. More broadly, rental inventory across the nation remains tight, and as economic recovery continues to gain momentum, we may be seeing the release of pent-up demand from renters who had been delaying moves due to the pandemic. Whereas last year’s peak moving season was halted by the pandemic, this year’s seasonal spike is more than making up for lost time.”