The Phoenix multifamily market has turned into a blooming desert for investors and apartment owners as low business costs and great weather has turned into a magnet for companies relocating from nearby California, pushing healthy demographic trends and boosting housing demand in the process, according to a new report from Yard iMatrix.

Rents rose 4 percent year-over-year as of April 2018. The company says they expect Phoenix rents to grow by 5 percent in 2018.

The pace of rent growth was well ahead of the 2.4% national rate, while the rental amount trailed the $1,377 national average.

Phoenix rents rose 4.0% year-over-year through April to an average of $1,048. While the metro’s pace of rent growth was robust and well ahead of the 2.4% national rate, the rental amount was still below the $1,377 national average. Rent growth has stayed elevated due to healthy demographic trends and above-average employment, according to the Yardi Matrix where reports can be downloaded here.

Phoenix job growth among best in the country

Even though it is slowing, employment growth in Phoenix continues to be among the strongest in the country, up 2.7% year-over-year, well ahead of the 1.6% national average.

Some 2,350 units were delivered in 2018 through April, 0.8% of total stock, 10 basis points above the national average. The consistent number of completions through April could signal a near-cycle peak, especially since more than 7,600 units are expected to be delivered for the entire year. 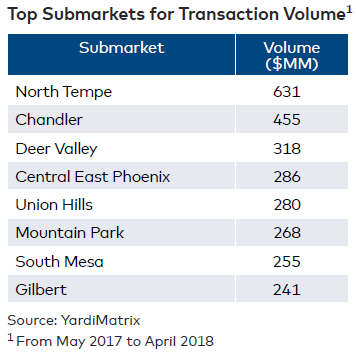 This report is courtesy of  Yardi Matrix. These and other highlights are summarized in a new Yardi Matrix report, “Phoenix: The Desert Is Calling,” a microeconomic analysis of the metro’s multifamily market. Get other Yardi Matrix downloads here.