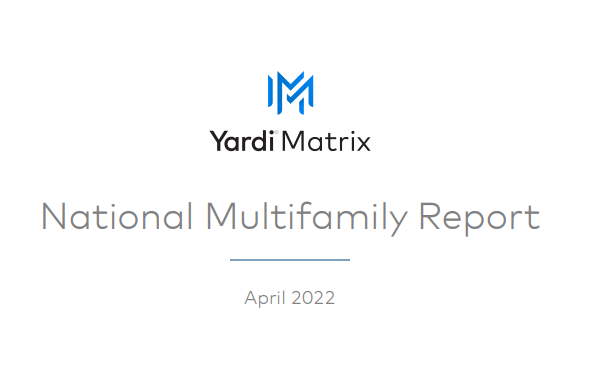 Multifamily rents have defied expectations and kept climbing as asking prices rose $15 in April, an all-time high, as weakening U.S. economic growth has not stopped multifamily rents, according to the latest Yardi Matrix report.

Overall the rate of rent growth remains elevated due to strong demand and a long-term shortage of housing that analysts estimate is between two million and five million units, the report says.

Yardi Matrix writes that, “Coming off a record year of growth, in a weakening economy, there was not much doubt that multifamily growth would slow down in 2022, but by how much?

“So far into the spring leasing season, the market is holding up well.”

Highlights from the report:

Some cautions in the future

Yardi Matrix writes, “Certainly, deceleration will happen, and there are warning signs on the horizon” with the economy.

However, “The demand-supply equation for multifamily should remain favorable even in the event of a modest economic slowdown.

The job market is strong, and household finances remain healthy, as evidenced by a robust increase in consumer spending during the first quarter. Higher mortgage rates have put a crimp in the for-sale housing market, which is likely to keep some renters in apartments, while household formation growth is expected to remain strong,” Yardi Matrix says.

“Rapidly rising house prices and increasing interest rates are keeping homeownership out of reach for some potential buyers, while others are losing bids to the growing competition from institutional investors.

“The increasing preference for suburban housing has added to demand for single-family rentals. New development is on the rise as more and more investors enter the sector, though that will be tested as development and borrowing costs increase,” the report says.