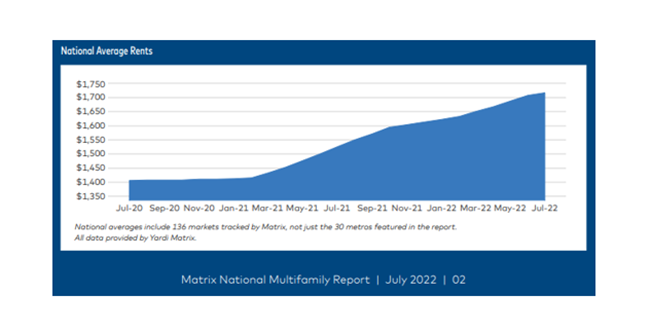 U.S. multifamily rent growth remains strong despite a deceleration in rent growth performance as asking rents are up 12.6 percent year-over-year through July, as demand continues to exceed supply, Yardi Matrix says in the July Multifamily Report.

Supply continues to be an issue and the National Multifamily Housing Council estimates that the U.S. needs 4.3 million new units built through 2035 to meet demand.

“Rent growth remains lofty just about everywhere by historical standards, but the rate of increase in high-growth metros is falling,” Yardi Matrix says in the report.

Here are some highlights in the report:

Economic growth is slowing and polls show consumer confidence is weakening as the Federal Reserve has raised policy rates 150 basis points over the last two months in an effort to slow inflation.

“A weaker economy could cool gains, though apartment asking rents may not immediately respond to the Fed’s actions because rising mortgage rates have slowed the for-sale housing market.

“That might help demand for apartments as first-time homebuyers continue to rent and wait for a more opportune time to buy,” Yardi Matrix says in the report.

Yardi Matrix says, “A big part of the recent growth in apartment rents has been the supply-demand imbalance. The U.S. currently has a 600,000-unit apartment shortfall with another 3.7 million units needed through 2035 to meet demand.”