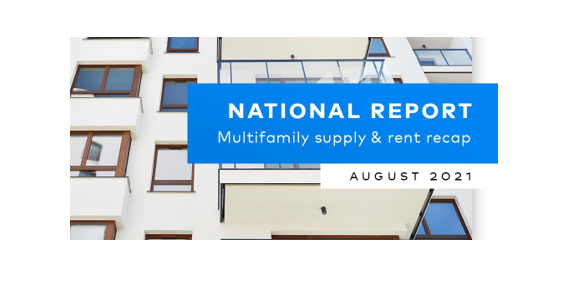 The 10.3 percent increase “was the first ever double-digit increase in the history of our dataset,” the report said.

All metros that Yardi Matrix tracks had positive year-over-year rent growth in August, with a couple of exceptions, as “the rebound is no longer concentrated in tech-hub metros in the Southwest and Southeast, although some year-over-year numbers seem inflated as they are comparing current rents to last summer, when many metros were struggling,” the report said.

Some highlights from the report:

“Many people who were living at home during the pandemic or were living with roommates are now able to afford their own apartments, creating a surge in demand,” the report said.

Seattle stands out as a metro that struggled throughout the pandemic, due in part to a surge in remote work, especially in the tech sector, that drove people to leave the metro. This month, however, Seattle rents increased by an astounding 3.1 percent.

“As the eye-popping rent growth continues in the single-family rental sector, institutional investors are getting more active,” the report said.

“As millennials reach home-buying age, the price of single-family homes continues to be out of reach for many. The continued single-family home price appreciation, coupled with a need for more space, is fueling strong demand for the sector that is unlikely to slow,” Yardi Matrix said in the report.