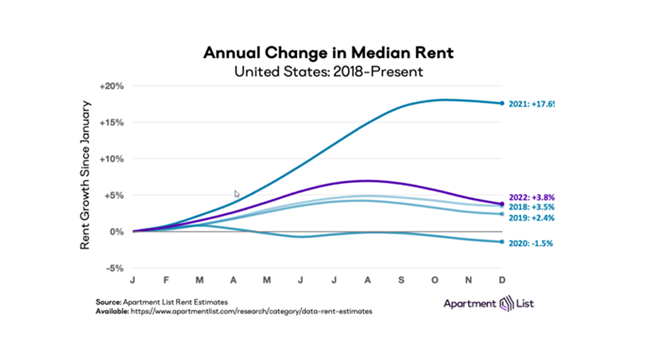 The market cooldown remains widespread, with rents down in 90 of the nation’s 100 largest cities in December of 2022, Apartment List says in their January report.

The national month-over-month rent change is plotted in the chart here, shows how this winter’s price declines are steeper than those of previous years, the report says.

“We expect that 2023 will see bargaining power shift back to renters, and that rent prices this year will grow only modestly, if at all,” the Apartment List research team writes. 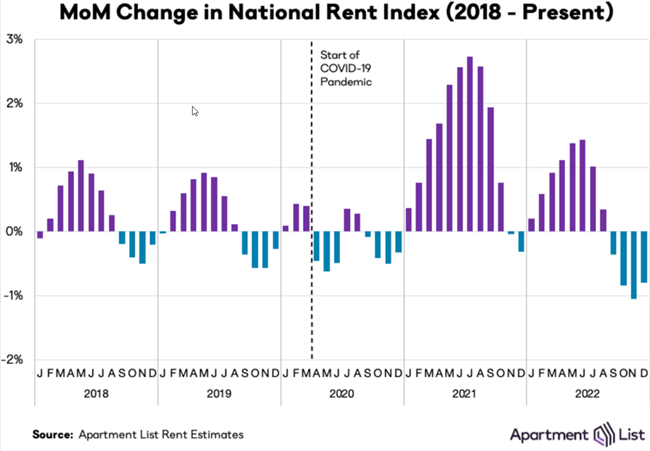 “The recent slowdown has been geographically widespread. Rents decreased in December in 90 of the nation’s 100 largest cities. New York City saw the nation’s sharpest decline, with prices down by 3 percent month-over-month.

“And over a longer horizon, we are continuing to see an ongoing cooldown in many of the recently booming Sun Belt markets. Las Vegas, Phoenix, Jacksonville, and Riverside all rank in the top 10 for fastest rent growth since March 2020, but none of these metros has seen rents increase by more than 1 percent over the past twelve months.

The cooldown in rent growth is being mirrored by continued easing on the supply side of the market. 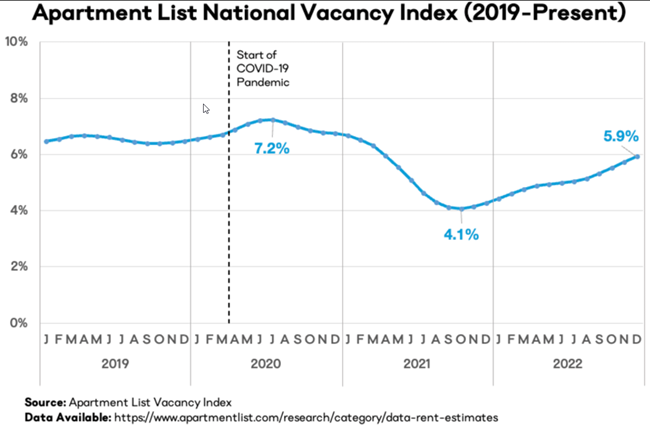 “Our vacancy index now stands at 5.9 percent, after more than a year of gradual increases from a low of 4.1 percent last fall. And in the past four months, this easing of the vacancy rate has picked up steam again, after plateauing a bit over the course of last summer.

“Today’s vacancy rate still remains slightly below the pre-pandemic norm, but is quickly approaching that benchmark,” the report says.

In the most recent four months from August through November, the vacancy rate has increased by 0.8 percentage points, reaching 5.9 percent in December 2022.

“After a prolonged period of skyrocketing rent growth, and with non-housing related costs also getting more expensive as a result of broad-based inflation, it seems that some Americans are moving back in with family or roommates, or delaying striking out on their own. At the same time, new apartment construction is picking up steam again after facing pandemic-related delays in recent years,” the report says.

“This seasonal dip is likely to persist through the winter, but as moving activity picks back up in the spring and summer, we are likely to see a return to positive rent growth. We expect that 2023 will be a year of flat to modest rent growth, but it is unlikely that prices will fall significantly throughout the year,” the report says.