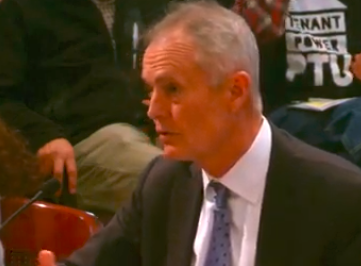 Several landlords said the city would be taking away landlords’ ability to protect their investments when they cannot properly screen tenants, with one landlord saying, “It is too risky to put them in my $100,000 unit. I am not going to risk renting to someone without a government-issued ID.”

Landlords also said existing laws already cover the issues and the ordinance is not needed.

The strongest business case was stated by Clyde Holland, CEO and chairman of the Holland Partner Group which manages 56 apartment communities and more than 17,000 units in Oregon, Washington, California, Arizona and Colorado, who said he has “grave concerns” about the ordinance.

Holland, pictured above, said the U.S. Department of Housing and Urban Development (HUD), Fannie Mae and Freddie Mac, all of which are involved in the underwriting of loans for apartment construction, have requirements for tenant screening that borrowers such as apartment developers must follow, and the proposed Portland ordinance would be in conflict with those federal screening requirements.

He said those agencies “require we screen” for certain levels of tenant income in order to “be in compliance with financing” or a developer “could be held in default on their mortgages.”

“We are required to screen three-times income in order to attract institutional equity” to develop apartment projects, Holland said.

The cost of landlords’ compliance with the proposed regulations is something the city must consider, Holland said.

“In order to look at the compliance aspects of the very confusing pages here, our estimate is it will take one person per hundred units to be able to deal with the challenges,” Holland said. He estimated it will cost $65 per unit per month to comply with all the requirements of the proposed ordinance, or about $125 million a year in Portland.

He said the proposed ordinance, if enacted, will end up raising rental rates for renters in Portland. He said the city is not considering the cost to landlords of having to comply with the requirements of the ordinance, and that these costs will be passed along to tenants.

All the rules in Portland, including inclusionary zoning, tenant relocation requirements, registration and the proposed tenant screening have substantially “lowered the ability for us to access debt and equity. It has cost the city of Portland about $5 billion of investment in housing.”

He said 20 percent of his company’s units are set aside for affordable housing.

Holland closed his testimony by suggesting the city submit the ordinance for economic analysis before continuing to press for its passage.

Proponents for the ordinance say the lack of standardized tenant screening creates discrimination.

“Discrimination in housing is alive and well in our state and in our city,” said City Commissioner Chloe Eudaly, who proposed the ordinance. “This package, if passed, will significantly decrease incidents of housing discrimination, whether by default or design.”

Coya Crespin, Portland Metro Regional Organizer for the Community Alliance of Tenants, told the council the “wild-West style” of tenant screening is used by landlords to discriminate. “Landlords are using scare tactics to get tenants to testify against this ordinance.” She said the screening system is shutting out low-income tenants and tenants of color.

Ordinance introduces too much complexity in the process

Dan Hayes, who told the council he has 26 rental properties in Portland, said “All landlords want our units filled. We screen to give tenants the best chance of success.”

He said Portland used to provide a one-day landlord-training class. But not this year. He suggested the council take more time and simplify the proposal and “listen to more solutions from people in the industry,” then implement policy.

“If you continue to introduce complexity without providing policy, Portland will become the most expensive city to live in,” Hayes said.

Sue Scott, a landlord, said 60 percent of landlords are small investors and that big companies have caused some of the problems.

“Rental providers have not been listened to by the city. The city has chosen to railroad this through their own agendas,” she said.

“If you want more big rental companies in Portland who never bend a rule for a tenant – carry on,” Scott told the council hearing.

Another landlord, Kathy Rogers, echoed that sentiment, saying she has a regular full-time job and manages her rentals as well.

“When a tenant cannot pay rent, we rarely evict them. We allow them to move out and break the lease and we take the hit and help them find affordable housing.

“We lose rent for a month or more,” she said, noting that many owner-managers like herself do the same.

“I provide affordable housing for $850 a month. If a tenant has income twice the rent but has good credit I would rent to them,” she said.

“We are not evil landlords,” Rogers said.

Some landlords think the city’s efforts are actually taking steps in the wrong direction, and say the new rules may force some smaller landlords out of business.

“There are a lot of property owners and landlords who are choosing to sell their properties in Portland, and move their investments to other states where there is no rent control and aren’t as many limitations on what landlords can do,”  Ilyse Ball, a Portland Realtor and landlord, told katu.com.

“It’s the mom-and-pop landlords, who are usually more lenient to these types of tenants, the ones the commission is trying to protect, that can’t take the financial hit,” Ball said.

Ball said she’s rented to people with questionable backgrounds before.

“But after meeting them, and talking to them, and deciding myself they would be good renters, I have taken a chance, but that has been my choice to take that chance. And I think it’s unfair to take that choice away from landlords,” Ball told katu.com.

When the council will consider the proposed ordinance next or vote on it is not clear.

Chloe Eudaly FAQ: Will this proposal force landlords to rent to dangerous criminals and make other tenants unsafe?