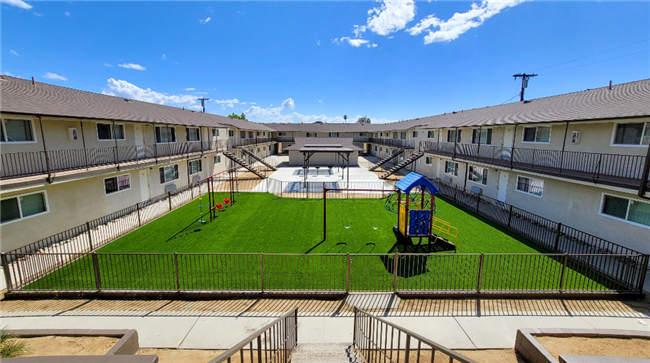 A HomeVestors franchise has moved from ugly houses to an ugly apartment complex makeover in partnership with the city of San Bernardino, according to a release.

The franchise completed a dramatic $2 million makeover on a 44-unit apartment complex that had been a blight on its local community. The property, which neighbors an elementary school, had been a public health hazard and was shut down by the city of San Bernardino when franchisees Berto Ramos and Manuel Ramirez took it on with their “We Buy Ugly Houses” mentality.

Built in the 1960s, the complex spent years in a state of disrepair as one of the area’s most troublesome residential properties.

The properties were so far beyond code that apartments were left with no running water, windows or electricity, and the city had forced the mostly absentee previous owner to surrender the property. Ramos and Ramirez purchased it and completely renovated it to not only meet code, but to also reach the highest level of quality in local rentals. In addition to a new water and sewer system and heating and cooling upgrades, each unit now has its own heating and air conditioning system, water source, and shutoff valve.

“This property had been a challenge for the city on a daily basis for years before we took control. Given the extensive problems the last owner let go unaddressed, the city was weary about who to entrust it with – they knew its state at the time was wrong, needed someone to fix it, and didn’t want to end up with a similarly delinquent landlord,” said Ramos.

“The truth is, it takes real estate investors like us to help change these community situations. Law enforcement, the city and the courts can’t bear the full burden. Someone like us needs to invest the attention and capital, treat the neighborhood with respect, and give them what they need, which in this case was 44 quality homes for local residents that were previously not available.”

The project was handled by the HomeVestors franchisees as they would with any of their other ugly-house makeovers. Every asset was redone – kitchens, bathrooms, and bedrooms. Public areas were made over, including the addition of new courtyards, play areas, and barbecues. The property, once viewed with trepidation by teachers at the school next door became a clean and safe haven for families. Reopened in March, the renamed Golden California Apartments are already 80 percent full and expected to be at occupancy this month, according to the release.

“People are hurting, rents are skyrocketing, and that makes it even more important that we repair a property like that so people can live there,” said Councilman Damon L. Alexander, whose seventh ward includes the Golden California project. “There’s no reason any San Bernardino resident should not have a good place to live, and there’s no reason why other residential properties in the city can’t be upgraded the same way.”

More than 80 percent of houses HomeVestors purchases are less than 1,400-square feet and were built before 1980, though some are multifamily homes like the San Bernardino project. Franchises generally rehab and sell their homes or hold them as investment properties.

10 Things To Check in a DIY Rental Property Inspection