Apartments are getting bigger as new apartment builders are expanding the size of apartments, especially to accommodate home office space, according to a new study from RentCafe.

Experts confirm that this upsizing trend is linked to how renters’ priorities have shifted because of the pandemic.

“The pandemic and work-from-home has made people more conscious of the space in which they live and work,” said Doug Ressler, manager of business intelligence at Yardi Matrix. “The pandemic has significantly accelerated issues on designers’ minds well before 2020. These issues involve the rise of the home as a workspace, and a deeper emphasis on health and well-being.”

Kirkland, Washington and Scottsdale, Arizona are examples of two cities where apartments are getting bigger with new construction.

For example, Kirkland, located on the eastern shore of Lake Washington, is adding  an additional 211 square feet to apartments as compared to those built in the last half of the 2010s. Next is Scottsdale, adding 208 extra square feet.

RentCafe explains more about its findings: 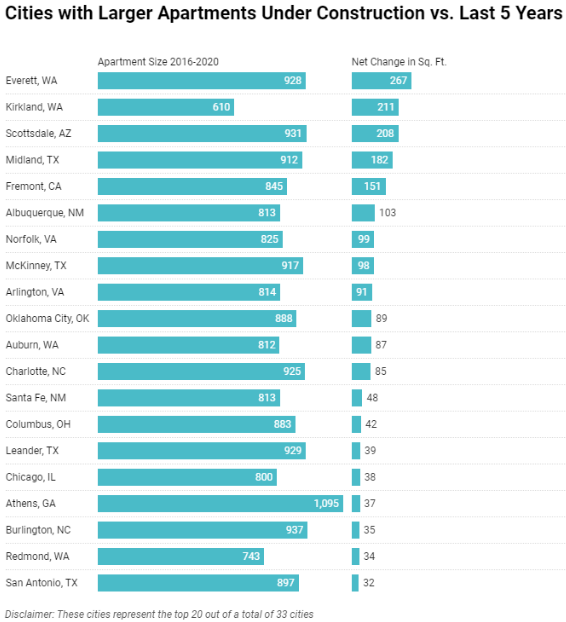 “At the time of design three years ago, this approach went against the grain of other developments in downtown LA. The pandemic and resulting work-from-home model has only accelerated this trend and increased demand for more space. In addition to Llewellyn’s units being on average 20 percent larger than competitors, the unit mix is made up of 65 percent two-bedrooms. This was done to allow renters to share the cost of living with a roommate or utilize a separate and private work-from-home space,” Valente said.

Too early to call it a home office trend?

Daryl Spradley, Senior Vice President of Charles Wayne Consulting, Inc. said that while some places are experience an upsizing trend, it’s still too early to know for sure whether it’s an effect of the pandemic. .

He told RentCafe that this growth in size is triggered by developers who are addressing “renters by choice” and “digital nomads” — people with high income who choose not to buy, but to rent, due to various reasons linked to lifestyle, such as mobility.

“The number of people that earn over $100,000 a year is significantly higher than it was 2 or 3 years ago. Those are renters, but obviously renters by choice because they can go out and buy a house,” Spradley said.

You can read the full report and methodology here: https://www.rentcafe.com/blog/rental-market/apartment-size-increase-in-the-u-s/