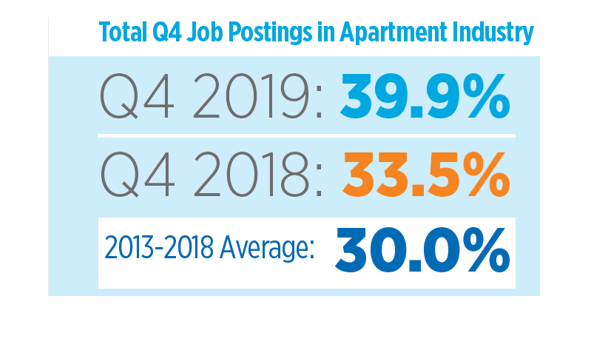 Nearly 40 percent of available real estate jobs across the United States were in the apartment jobs sector during the fourth quarter of 2019, well above the longer-term average of 30 percent, according to the latest NAA (National Apartment Association) jobs report.

Leasing-consultant job openings had the largest growth in demand year-over-year with an increase of 0.8 percentage points.

Since 2014, leasing-consultant and maintenance-supervisor positions had the greatest increase in demand, up by 1.9 percentage points. Denver and Austin had the highest location quotients, meaning demand in these markets was three times the U.S. average. 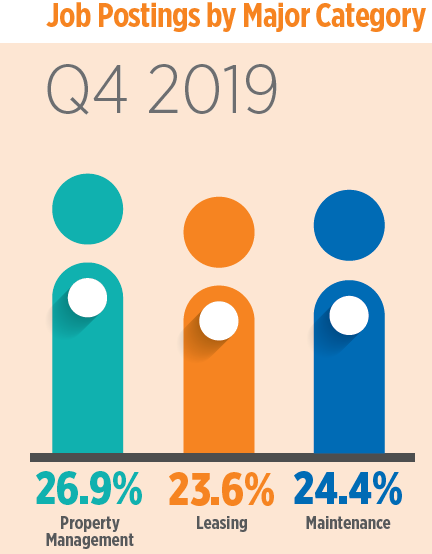 in the apartment industry, increasing 8.1 percentage points. Experience with Yardi Software and writing also saw a significant increase in the percentage of jobs requiring these skills since 2014.

The apartment sector often competes with the hospitality and retail sectors for talent with similar experience and skills. Customer service, communication, and organizational skills are among the most desired skills across all three sectors.

During the fourth quarter, Seattle was the only market especially challenged by a competing sector with a high concentration of both apartment jobs and retail jobs available there.

“Our education institute is a credentialing body for the apartment industry. They hear often that one of the biggest problems keeping our industry leaders up at night is the difficulty in finding talent, attracting talent and retaining talent,” NAAEI’s Paula Munger said.  “Labor-market issues are happening in a lot of industries, certainly with the tight labor market we have.”

So NAA partnered with Burning Glass Technologies. “They have a labor-job posting database that is proprietary,” she said, and they can “layer on data from the Bureau of Labor Statistics (BLS). We looked at that and thought we could do something that is really going to help the industry and help benchmark job titles and trends as we go forward.”