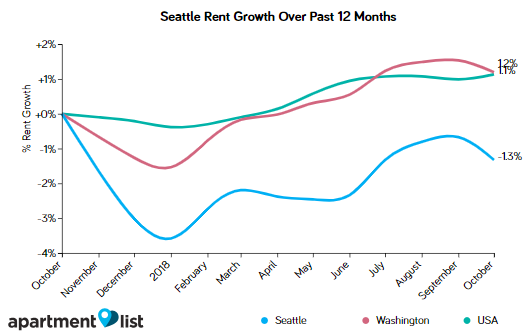 Seattle rents have declined 0.7% over the past month, and have decreased moderately by 1.3% in comparison to the same time last year, according to the November report from ApartmentList.com.

Currently, median rents in Seattle stand at $1,340 for a one-bedroom apartment and $1,660 for a two-bedroom. Seattle’s year-over-year rent growth lags the state average of 1.2%, as well as the national average of 1.1%.

While rent prices have decreased in Seattle over the past year, the rest of the metro is seeing the opposite trend. Rents have risen in 9 of the largest 10 cities in the Seattle metro for which we have data. Here’s a look at how rents compare across some of the largest cities in the metro. 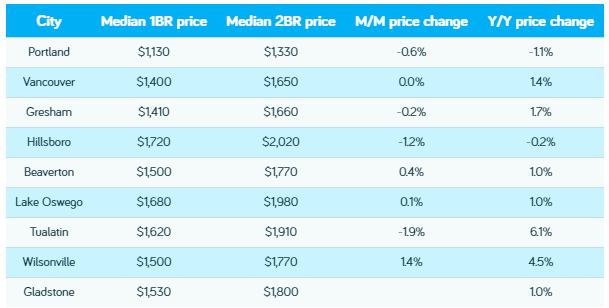 Rents Up In Spokane And Vancouver

As rents have fallen moderately in Seattle, many similar cities nationwide have seen prices increase, in some cases substantially. Compared to most other large cities across the country, Seattle is less affordable for renters.

Apartment List is committed to making our rent estimates the best and most accurate available. To do this, we start with reliable median rent statistics from the Census Bureau, then extrapolate them forward to the current month using a growth rate calculated from our listing data. In doing so, we use a same-unit analysis similar to Case-Shiller’s approach, comparing only units that are available across both time periods to provide an accurate picture of rent growth in cities across the country. Our approach corrects for the sample bias inherent in other private sources, producing results that are much closer to statistics published by the Census Bureau and HUD. Our methodology also allows us to construct a picture of rent growth over an extended period of time, with estimates that are updated each month.