Seattle is among the most sought-after rental markets and joins Chicago, Los Angeles and Atlanta as the top markets in the United States that are the most popular among renters looking to relocate – while current residents aren’t looking to leave – according to a new survey.

To find the most sought-after rental markets, a new HotPads analysis ranked the top 50 metro areas based on the share of rent searches that are local and how often they appeared as a top search destination for renters exploring a move from other areas. Based on this criteria, Chicago and Los Angeles are the most popular markets right now, followed by Atlanta and Seattle.

“As the rental market picks up speed, it makes sense that renters would be drawn to areas with strong job markets and relatively affordable housing costs,” said Joshua Clark, economist at HotPads, in a release.

“However, there are drawbacks to being popular. More new residents typically increase demand for housing, which in turn can make the market more competitive. While it often takes time for rent shoppers to take the plunge and move, those looking to relocate can benefit from making a decision sooner rather than later. If these areas don’t keep up with increased demand, rent prices could rise even faster,” Clark said. 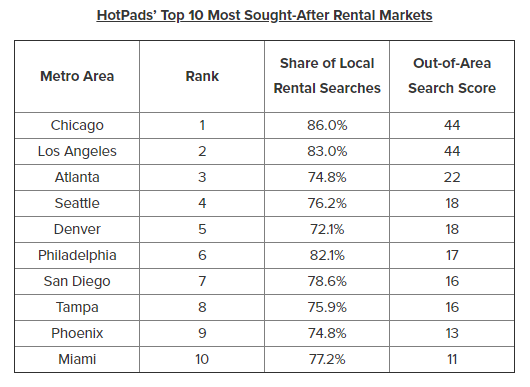 These markets are popular because they all have historically strong job markets, and many are affordable – recent research shows that renters can expect to spend around the recommended 30 percent of their income or less on rent in seven of the most sought-after markets.

HotPads’ latest quarterly rent report found that rents are growing faster now than they were last year in seven of the top 10 markets, so rent affordability is a rising concern.

Methodology: HotPads analyzed rental searches on its platform to find the most sought-after areas for renters in the United States. To measure interest from locals, we used search data to determine where the most apartment searches came from local users. To measure interest from prospective renters outside the metro area, we rated each market based on the most popular search destinations for renters in the 50 largest metro areas to find the Out-of-Area Search Score; a score of 44 means that a market was a top destination in 44 of the 50 largest markets.