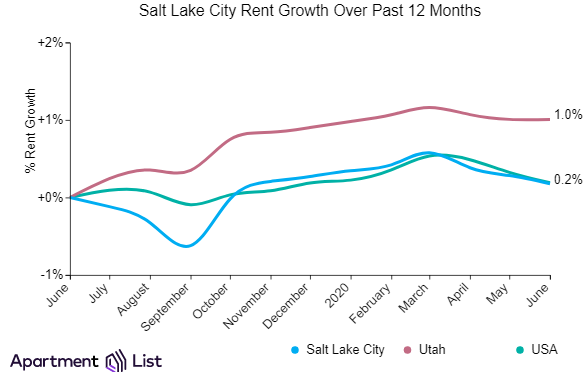 Salt Lake City rents have declined 0.1 percent over the past month, but have remained steady at 0.2 percent in comparison to the same time last year, according to the June report from Apartment List.

Median rents in Salt Lake City stand at $877 for a one-bedroom apartment and $1,088 for a two-bedroom. Salt Lake City’s year-over-year rent growth lags the state average of 1.0 percent, but is in line with the national average of 0.2 percent.

Ogden rents increased over the past month

Ogden rents have remained flat over the past month, however, they are up marginally by 0.9 percent year-over-year.

Currently, median rents in Ogden stand at $699 for a one-bedroom apartment and $896 for a two-bedroom. Ogden’s year-over-year rent growth lags the state average of 1.0 percent, but exceeds the national average of 0.2 percent.

“I would note that the areas where we’re seeing the most significant rent dips are in local economies that are heavily dependent on tourism, such as Las Vegas, Orlando, and Miami. Compared to those cities, Salt Lake City, Seattle and Portland have higher shares of workers employed in knowledge occupations that can be done from home, so they’re a bit more protected from the harshest economic impacts,” he said. 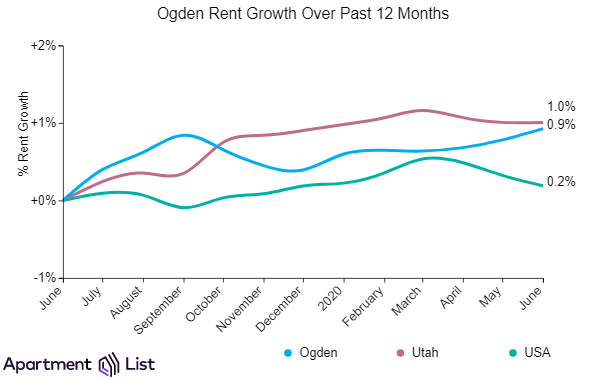