Most people think of tech jobs as providing nice high salaries, but in many tech hubs rent prices are rising even faster than the tech salaries may be able to support, according to new research.

“While there are clear advantages to living in or near a tech hub, more people relocating to these cities can put a certain pressure on the rental market, leading to rising rents,” says a new report from RentCafe.

And with a new generation of startups going public soon, things will get scorching in America’s hottest housing markets, even for renters with high-paying tech jobs, the report says.

“Over a 3-year period, rents grew faster than the wages of IT employees in 10 of the top 15 largest tech hubs, according to our latest analysis of US Census, BLS and Yardi Matrix data.” And here’s the real kicker: half of the top 10 emerging tech hubs are already seeing this trend as well.

Seattle near the top

Seattle is a top metro tech hub, where the presence of both Microsoft and Amazon has certainly helped the metro reach its high 6.8% share of IT jobs. 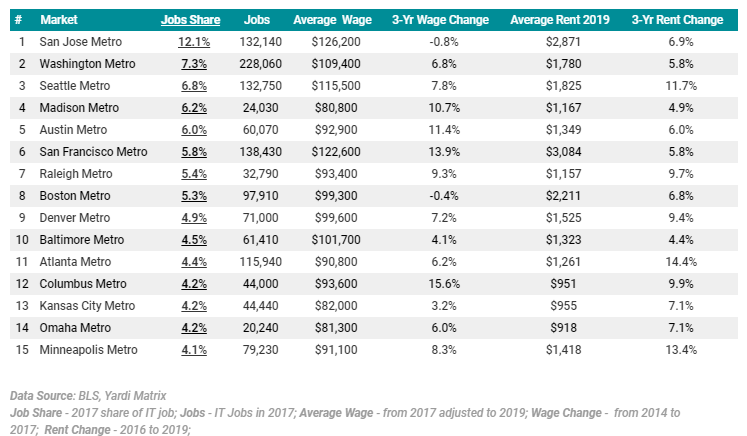 RentCafé used the ‘Computer and Mathematical Occupations’ from The Bureau of Labor Statistic database for IT jobs-related data and took into consideration the 2014 and the 2017 data at metro level (most recent BLS data). The average wages in IT jobs were calculated based on the most current wage data from The Bureau of Labor Statistics (2017) adjusted for inflation to 2019 dollars and rounded to the nearest hundreds. The rent data were provided by Yardi Matrix, a RentCafé sister company focusing on  apartment market intelligence and providing up-to-date information on large-scale multifamily properties of 50 units or more in over 130 U.S. markets.