The national apartment rents index is up 0.1 percent month-over-month in the peak of the rental season, marking the sixth straight month of increasing rents, except in Portland and Seattle where rents have declined slightly, according to Apartment List.com.

Year-over-year growth now stands at 1.2 percent, lagging the rates from the two prior years.

“While rents were increasing at a fairly fast clip over in May and June, things cooled off in July with a modest 0.1 percent month-over-month increase,” according to Chris Salviati, housing economist at Apartment List.

“This slowdown is notable, given that we’re still in the midst of the summer months when rental activity is generally at its busiest. For comparison, month-over-month rent growth for July was 0.4 percent in each of the two prior years. This month’s data serves as further evidence of softness in the market, as rent growth over the past year remains sluggish compared to the previous two years.

“Year-over-year growth currently stands at 1.2 percent at the national level, which is well below the 3.1 percent rate we saw this time last year as well as the 2.8 percent rate from July 2016. Rent growth is also pacing well behind the overall rate of inflation, which stands at 2.9 percent as of the latest data release, and is similarly lagging growth in average hourly earnings which have increased by 2.7 percent over the past twelve months. With the homeownership rate continuing to trend upward and more new supply slated to come online throughout the year in many markets, it’s possible that rent growth will continue to be sluggish, a welcome bit of relief as millions of our nation’s renters continue to struggle with housing affordability.

Only 23 of the 100 largest cities have seen rents fall over the past year, though an additional 24 saw modest gains of less than 1.0 percent. The chart below shows trends for the five cities where rents declined most: 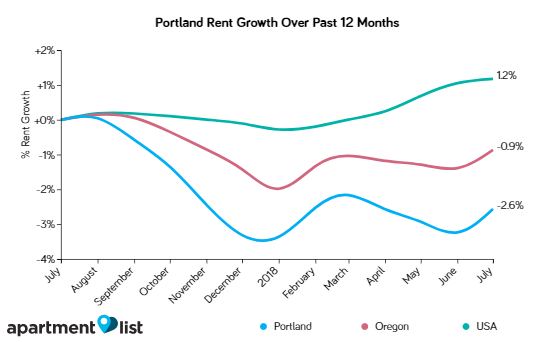 Portland rents have increased 0.7% over the past month, but are down significantly by 2.6% in comparison to the same time last year. Currently, median rents in Portland stand at $1,130 for a one-bedroom apartment and $1,330 for a two-bedroom. Portland’s year-over-year rent growth lags the state average of -0.9%, as well as the national average of 1.2%.

As rents have fallen significantly in Portland, many comparable cities nationwide have seen prices increase, in some cases substantially. Portland is also more affordable than most other large cities across the country. 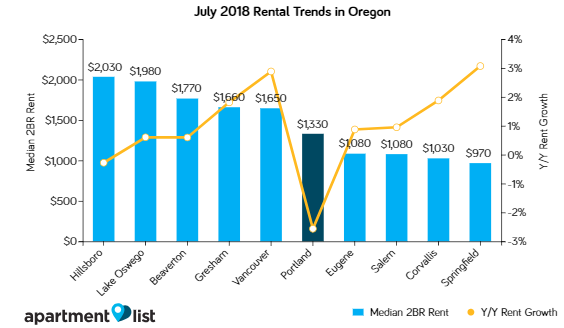 Seattle rents have remained steady over the past month, but have decreased significantly by 2.0% year-over-year. Currently, median rents in Seattle stand at $1,320 for a one-bedroom apartment and $1,650 for a two-bedroom. Seattle’s year-over-year rent growth lags the state average of 0.9%, as well as the national average of 1.4%.

Rents rising in other cities in the Seattle metro

While rent prices have decreased in Seattle over the past year, the rest of the metro is seeing the opposite trend. Rents have risen in 9 of the largest 10 cities in the Seattle metro for which we have data. Here’s a look at how rents compare across some of the largest cities in the metro. 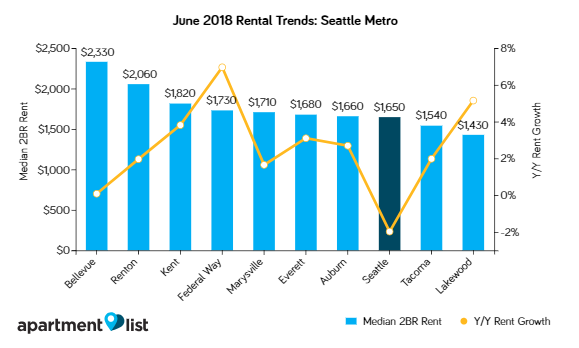 Apartment List is committed to making our rent estimates the best and most accurate available. To do this, they start with fully representative median rent statistics for recent movers taken from the Census Bureau American Community Survey. Then, extrapolate this data forward to the current month using a growth rate calculated from the company’s listing data. Growth rates are calculated using a same-unit analysis similar to Case-Shiller’s approach, comparing only units that are available across both time periods in order to provide an accurate picture of rent growth in cities across the country.

The approach corrects for the sample bias inherent in private sources, producing results that are representative of the entire market. The company’s methodology also allows construction of a picture of rent growth over an extended period of time, with estimates that are updated each month. Read more about the methodology here.