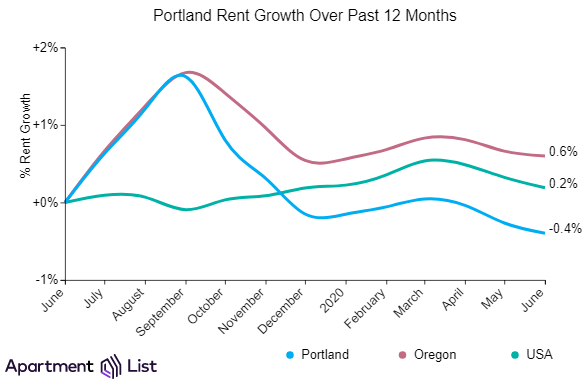 Rents in Portland continued to decline in June, dropping another 0.1 percent after a 0.3 percent drop in May, according to the latest report from Apartment List.

Portland rents year-over-year have decreased by 0.4 percent in comparison to the same time last year.

“I would note that the areas where we’re seeing the most significant rent dips are in local economies that are heavily dependent on tourism, such as Las Vegas, Orlando, and Miami. Compared to those cities, Portland has higher shares of workers employed in knowledge occupations that can be done from home, so they’re a bit more protected from the harshest economic impacts,” he said.

Rents are also dropping rapidly in San Francisco and the Bay Area of California.

While rent prices have decreased in Portland over the past year, the rest of the metro is seeing varying rent trends.

Of the largest 10 cities that Apartment List has data for in the Portland metro, half have seen increases, while the other half have been decreasing. 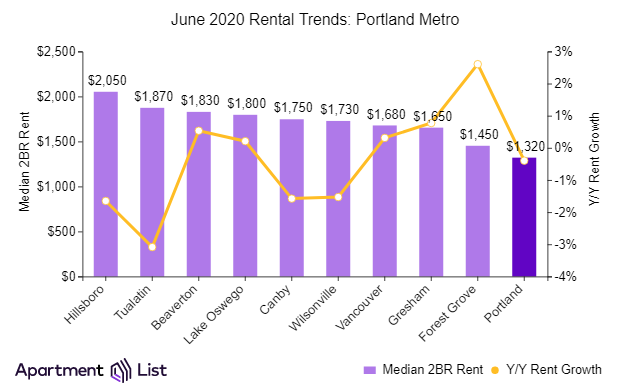 Salviati said as far as longer-term impact, the pandemic’s effect on rent prices will depend heavily on how quickly the economy is able to recover.

“Even in the best-case scenario, it’s highly possible that we could see a protracted uptick in downgrade moves as many households facing financial hardship begin looking for more affordable housing,” Salviati said.

National Rents Continue Downward In May