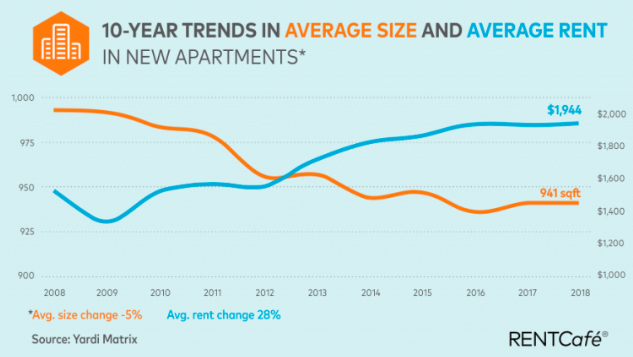 A new study shows the average size of apartments has declined over the past 10 years and Seattle has the smallest apartments in the U.S.

In its latest study, RentCafe, says the average apartment size has shrunk by 52 square feet over the past 10 years, now coming in at an average of 941 square feet.

Highlights of the smallest apartments in U.S. study 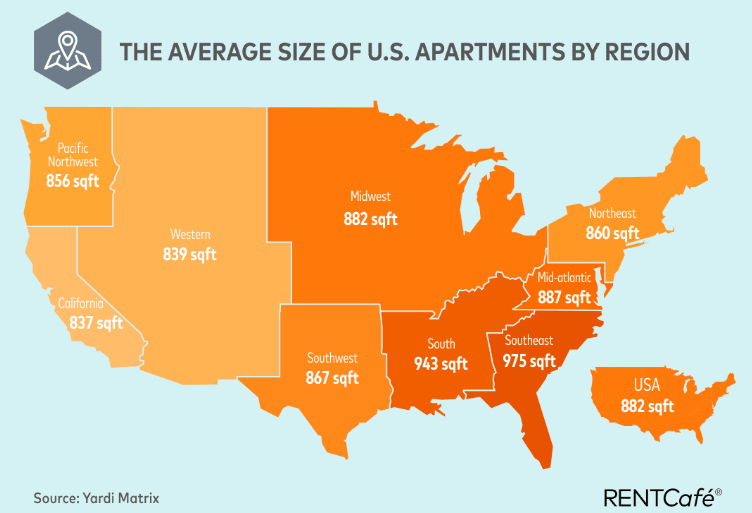 Changes in renters’ living habits are literally redrawing floor plans, according to the RentCafe study.

The largest share of apartment dwellers, millennials prefer living in locations close to restaurants and entertainment rather than having a large kitchen or living room to cook or entertain at home.

Studio apartments — the symbol of downtown living — have been cut down the most. The average studio apartment is 10% smaller than 10 years ago, reduced from 573 sqft in 2008 to 514 sqft this year.

Contrary to the growing interest in smaller units, studio apartments continue to represent a small piece of the rental market, only 5% nationally of all apartments. One-bedroom rental units make up the largest chunk of the national apartment stock (43%) and their floor plans have decreased by 4% over the last decade, while two-bedroom apartments have seen the least change in size, down by only 0.5% on average.

RentCafe ranked the top 100 cities with the largest rental stock in the country by the average size of their rental apartments.

This report was compiled by RentCafe.com, a nationwide apartment search website that enables renters to easily find apartments and houses for rent throughout the United States. The apartment size and rent data were provided by Yardi Matrix, a RENTCafé sister company specialized in apartment market intelligence, providing up-to-date information on large-scale multi-family properties of 50 units or more in over 130 U.S. markets.