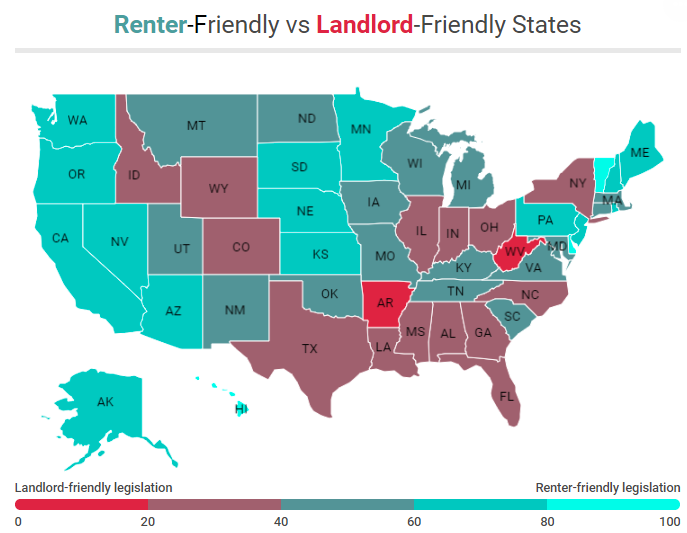 Legislation recently passed or pending in many states is making them more tenant-friendly and less landlord-friendly, according to some new research by RentCafe.

With Oregon passing a first-in-the nation rent-control bill, and Washington State considering extending the amount of time before a landlord can evict a tenant, it is clear landlord-tenant laws are evolving in many places in the United States.

In a recent study, RentCafe compared and contrasted landlord-tenant laws in 50 states and the District of Columbia. The study focused on 10 common aspects of the landlord-tenant relationship, which includes security deposits, rent increases, the warranty of habitability and eviction notices.  It also created a ranking system based on the best and worst scenarios for renters and landlords.

Vermont ranked first among the renter-friendly states, followed closely by Delaware and Hawaii. Rhode Island, Arizona, D.C., Maine and Alaska statutes also seem to favor tenants over landlords, according to the analysis.

On the other end of the spectrum, the laws in Arkansas and West Virginia were the least friendly to their renters, with Louisiana, Georgia, Wyoming, North  Carolina, Idaho, Ohio, Mississippi and Colorado following. Arkansas and West Virginia registered the same score on the scale, but since Arkansas is the only state where tenants can face criminal charges for failure to vacate, it earned the last place on the renter-friendly scale.

How rental laws were shaped by regional culture

The United States is in some ways a nation of nations, with each state having the right to create its own constitution and government. Over time, this facilitated the creation of very different laws and regulations,  with local culture and sensibilities playing a huge role in shaping the state’s legislation. 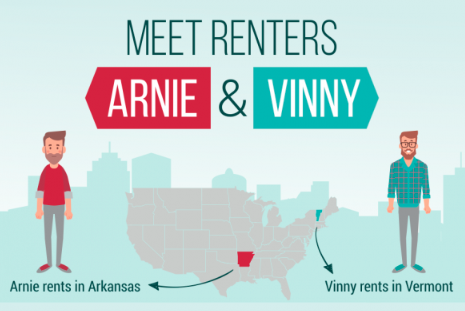 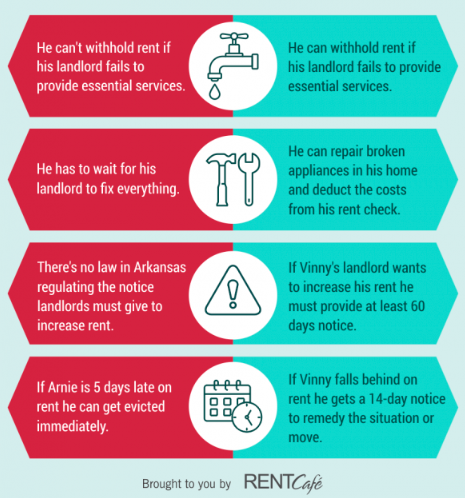 The relationship between landlords and tenants may sometimes prove tricky to manage, and problems emerge when either side doesn’t hold up their end of the agreement. That’s why it is important for states to have concise and unbiased legislation in place so as to avoid any misunderstandings.

The security deposit is an issue that every renter faces at the beginning of a new lease. There are 10 states that limit the security deposit amount to the equivalent of one month’s rent (for unfurnished apartments on a one-year lease). Among them are Hawaii, District of Columbia, Rhode Island, Massachusets, and Kansas.

Not having to wait forever to get your security deposit back (after any applicable deductions) at the end of your lease can also be a blessing, especially when you need that money to put down a deposit on your next apartment. Renters in Montana are the luckiest in that regard, as they’ll get theirs back in no more than 10 days. In Hawaii, South Dakota, Nebraska, Arizona, and Vermont, landlords are required to return security deposits within 14 days.

If you live in the District of Columbia, you get the longest termination notice for nonpayment of rent: 30 days.

Renters in Georgia, Vermont, and Delaware receive a generous 60-day notice of rent increase for month-to-month contracts, while those in Maine, Hawaii, and Nevada receive 30 days.

Vermont might have the best laws for renters, but it’s also one of 24 states that don’t set a limit for security deposits. Other examples are Georgia, Washington, Texas, Illinois, and New York.

Being able to withhold rent for failure to provide essential services (heat, hot water, and electricity) is another law that many would consider common sense, yet there are 11 states which don’t specifically allow this.

Furthermore, 14 states empower landlords to use harsh measures like serving an Unconditional Quit Notice against renters who violate their leases. Arizona, Hawaii, Virginia, Rhode Island, and South Carolina are some of them. To be fair, the situations in which this practice is allowed usually relate to serious breaches of the rental agreement, such as illegal drug possession, prostitution or other criminal activities. But there are also states where this type of notice can be used for simply being late on rent (Georgia, South Carolina, and West Virginia).

Also, in 8 states, including Maryland, Georgia, New Jersey, South Dakota, and Missouri, landlords have the option to immediately terminate a lease and file for eviction when the tenant is just a few days late on rent.

This analysis was performed by RENTCafé’s research team, which analyzed Landlord – Tenant laws across the 50 states and the District of Columbia. This analysis does not discuss rent prices and does not include legislation that specifically regulates rent prices.

In order to rank the states, the following 10 common aspects of the landlord-tenant relationship were used.