Your tenants are facing the highest financial stress rate in the past five years according to a new study from a personal financing and consumer banking site.

While you hear about the high cost of housing and rising rents, GOBankingRates surveyed over 7,000 Americans to get to the root of financial stress in the U.S. and found that the No. 1 cause is paying off debt, according to a release.

"Our survey results reiterate the impact the current debt crisis is having on Americans, really, no matter where in the country they are living," said Kristen Bonner, lead researcher on the study. "Americans are suffering from paying off their past expenses rather than looking forward and focusing on setting up their financial future."

The study visualized findings on the state level, identifying the top source of money-related stress in each state – populations in two-thirds of the states agree that paying down debt is their top financial anxiety.

The survey, executed by Google Consumer Surveys and commissioned by GOBankingRates, posed the following question:

Of the following, what is your No. 1 cause of financial stress?

The national breakdown of the findings is as follows: 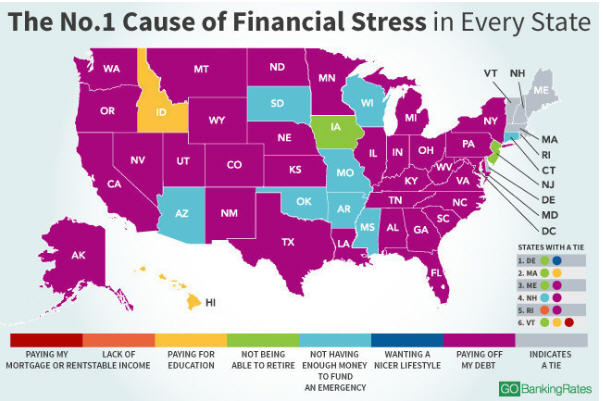 See the state by state break down of financial stress here.

Cost of Renting vs. Owning

Housing such as rents and mortgages is the biggest expense for many Americans, accounting for more than 30 percent of a household’s yearly expenditures, according to the Bureau of Labor Statistics. But housing costs can vary greatly, depending on where you live — and whether you’re a renter or owner.

Last month gobankingrates.com also surveyed the cost of renting vs. cost of owning across the country. 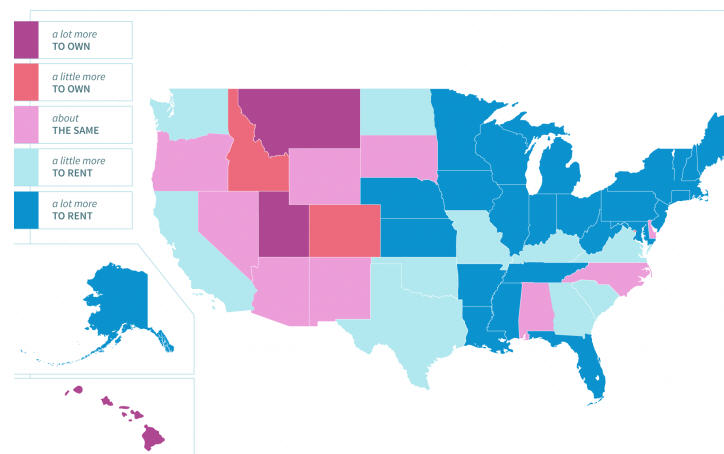 “Mortgage rates have been near historic lows for quite some time now,”  Svenja Gudell, chief economist of real estate and rental marketplace Zillow., told gobankingrates.com.  “This makes those monthly payments lower than monthly rent.”

With rents so high, though, it can be difficult to save up for a down payment and make the jump to homeownership, she said. If you’re considering becoming a homeowner, click through to find out if you should own or rent a home in your state.

Methodology: This GOBankingRates survey posed the question, "Of the following, what is your number 1 cause of financial stress?" to 7,054 people among all 50 states and Washington, DC. Respondents could select one of the following answer options: 1) "Paying off my debt (i.e. credit cards)" 2) "Not being able to retire" 3) "Not having enough money to fund an emergency" 4) "Wanting a nicer lifestyle," 5) "Paying for education," 6) "Lack of stable income" or 7) "Paying my mortgage or rent." Responses were collected through a Google Consumer Survey conducted from July 12, 2016 to July 14, 2016, and responses are representative of the U.S. online population. The survey has a 1.75 percent margin of error.