Under The Radar Apartment Markets That Are Strong Performers

Where can you still find affordable apartments in cities with good economic growth and jobs?

A new study out has found several “under the radar” smaller metros where things are booming for both landlords and renters who can find more affordable places to live.

While you hear regularly about places with high rental demand like San Francisco, Seattle, and New York, there are smaller mid-size metros where the demand is just as good says a new study by Axiometrics.

“Some metros such as Chattanooga, Ann Arbor and Reno may not have the same clout as the larger metros mentioned earlier, but would still make wonderful places for many people,” writes Carl Whitaker, chief real estate analyst for Axiometrics.

Here is a chart from Axiometrics on the “under the radar” markets. 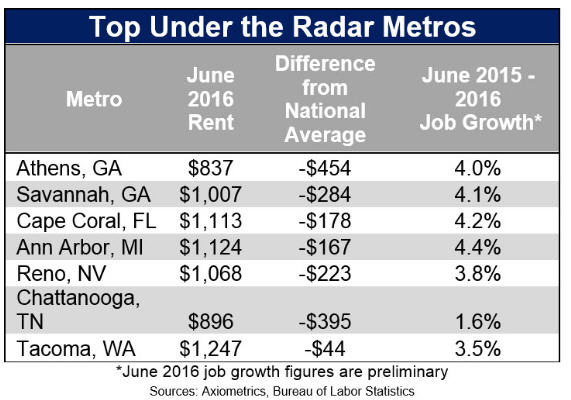 So Why Are These Metros Worth An Apartment Market Discussion?

Here are a few examples:

Our first look inside Tesla’s Gigafactory

Athens: A vibrant city with a Southern culture