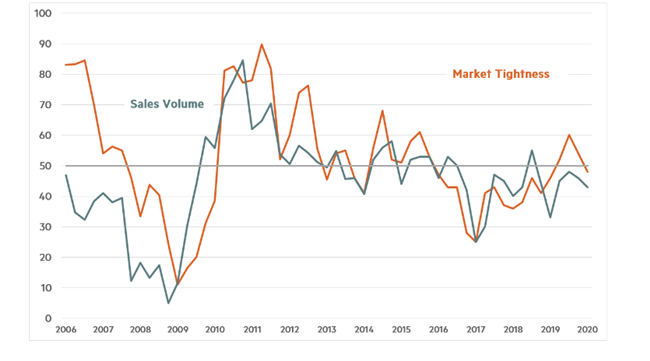 Rental housing In January showed mixed results for apartment conditions with some softening of the market, according to a release from the National Multifamily Housing Council (NMHC).

Certain market conditions are loosening. And the sales-volume index slipped further below the break-even level (50) to 43, indicating a continued softness in property sales, according to the NMHC Quarterly Survey of Apartment Market Conditions

“This reflects some seasonal decline; along with the paucity of available deals, some respondents also noted the negative impact of the new rent laws in New York,” said NMHC Chief Economist Mark Obrinsky in the release.

Additionally, the Market Tightness Index (48) slipped below the breakeven level (50).

“Apartment markets showed some softening in line with the slower leasing in the winter months,”  Obrinsky said. “Even so, the Market Tightness Index reading of 48 was the highest January reading in five years, and slightly higher than the January average of 45 in the survey’s 21-year history.”

On the financing side, the survey results painted a much different picture. The Equity Financing (61) and Debt Financing (68) indexes signaled improving availability of capital, coming in well above the breakeven level (50).

The survey also included a question on zoning reforms. Thirty-six percent of respondents indicated that they operate in a locality considering zoning changes, with eight percent of those respondents stating that their jurisdiction has already taken action. Of respondents in localities discussing revamped zoning regulations, 44 percent have observed strong community opposition.

About the Survey: The January 2020 Quarterly Survey of Apartment Market Conditions was conducted January 21-28, 2020; 78 CEOs and other senior executives of apartment-related firms nationwide responded.

Suburbs Where Renters Became the Majority Over Owners